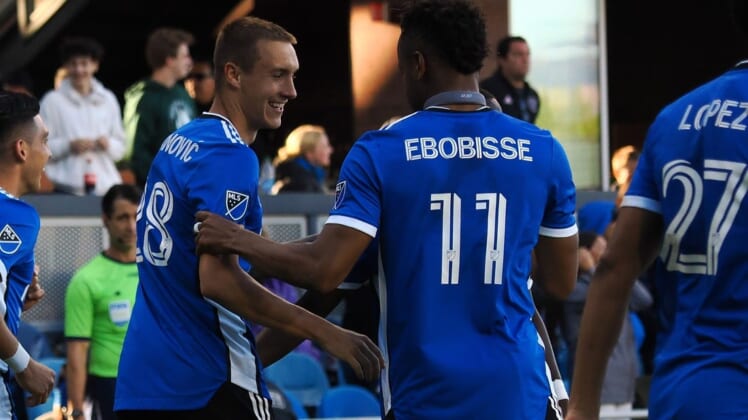 Toronto FC are reloading on the fly.

They play their first game since the trade of Alejandro Pozuelo when they entertain the San Jose Earthquakes on Saturday night.

Pozuelo’s contract expires after the season and Toronto (5-10-3, 18 points) has been struggling, so it unloaded the 30-year-old midfielder from Spain.

“Alejandro has been a very important player for TFC the last few years,” Toronto coach Bob Bradley said in a statement. “I have enjoyed working with him this season and wish him well in the future.”

Pozuelo had four goals and five assists in 16 starts this season and 26 goals and 31 assists in 88 MLS matches since joining Toronto prior to the 2019 season.

Toronto was expecting Italian midfielder Lorenzo Insigne to make his much-anticipated debut against San Jose (4-7-6, 18 points), but the 31-year-old sustained a calf injury and is slated to miss the next three matches.

Another Italian, 35-year-old defender Domenico Criscito, is expected to play in his first game with the club on Saturday.

The Earthquakes made some moves of their own. Javier “Chofis” Lopez was returned to Chivas de Guadalajara in Liga MX after his 18-month loan expired and defender Francisco Calvo was transferred to Konyaspor in Turkey.

Chofis excelled for San Jose last season with 12 goals and four assists but struggled with injuries this season and had just one goal in four appearances.

“He had a very successful 2021 season and was an important player for us, but unfortunately injuries have prevented him from making a similar impact in 2022,” Earthquakes general manager Chris Leitch said of Chofis. “We appreciate all his hard work and wish him the best of luck moving forward.”

Calvo was in his first season with the Earthquakes.

Both teams have struggled defensively. San Jose has allowed the most goals (35) in the league and Toronto (34) is second.

However, the Earthquakes were tighter in the back end during Sunday’s 2-1 home win over the Chicago Fire. Benji Kikanovic scored both San Jose goals.

Toronto lost 2-0 to the Seattle Sounders on July 2.

Jesus Jimenez leads the Reds with eight goals. Jeremy Ebobisse has a team-best nine for the Earthquakes, who are 0-6-2 on the road this season.