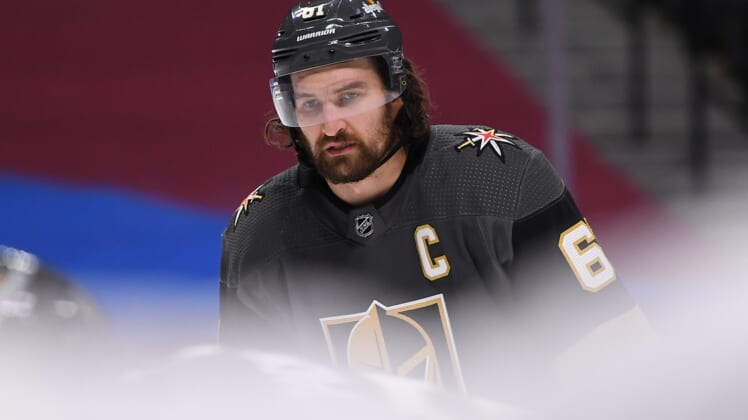 The Vegas Golden Knights and St. Louis Blues will be looking for answers Monday when the West Division playoff contenders meet for the first of two contests in St. Louis.

While the Golden Knights are 0-2-1 over their last three games, the Blues’ problems go much deeper, going 0-5-1 since March 22 while dropping out of playoff position.

The Arizona Coyotes now occupy the fourth and final playoff spot in the West, one point ahead of the Blues, while the Golden Knights are in second place, four points behind the red-hot Colorado Avalanche.

Yet, there is reason for optimism after the Blues gave the Avalanche a tough battle Saturday before Colorado’s Cale Makar scored with 41 seconds remaining to cap a 2-1 decision.

“It’s a tough one to swallow for sure not getting a point out of that,” Blues coach Craig Berube said. “Pretty good battle by us.”

The tight checking game had a playoff feel about it and it is an energy the Blues will try to replicate Monday. Getting free on offense will be the game plan. Satuday, Ryan O’Reilly scored the Blues’ only goal late in the opening period.

The Golden Knights are in a bit of an offensive funk as well with five total goals over their last three games. Vegas was second in the West Division and 11th in the NHL, before play Sunday, with 3.14 goals scored per game.

The Golden Knights will enter Monday after they were swept in a two-game home set against the Minnesota Wild. Saturday, they lost 2-1 when they gave up a pair of goals over a 55-second stretch early in the third period.

“We played pretty defensive (and) we made a lot of mistakes,” Golden Knights captain Mark Stone said. “We’ve had our looks, we’ve had our chances. (We are) up 1-0 into the third and lost the game. We were right there. Just got to find more ways to score goals.”

Vegas has won the last three meetings against St. Louis, including a convincing 5-1 victory at home on March 22, and has earned a point in all four meetings this season (3-0-1).

Golden Knights forward Ryan Reaves has missed three games with a lower-body injury, while defenseman Zach Whitecloud has missed two with an upper-body ailment. After missing 18 games because of an ankle injury, St. Louis center Ivan Barbashev played 25 minutes in the two games at Colorado.