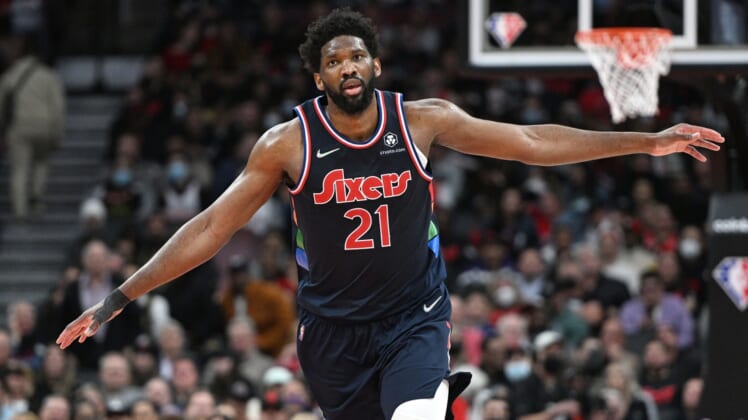 The 76ers are back home and crossing their fingers another potential return sparks a series turnaround in Philadelphia.

Trailing the Miami Heat 2-0 in their best-of-seven Eastern Conference semifinals, Philadelphia is pining for MVP candidate Joel Embiid to take the floor amidst myriad battle wounds from the 76ers’ first-round series win over Toronto.

“They’re coming home. Obviously, they are in an 0-2 hole, so I do expect him to play,” Heat forward Bam Adebayo said Thursday.

Sixers coach Doc Rivers had “no update” to Embiid’s status on Thursday and had only seen his franchise centerpiece via FaceTime in recent days. Rivers said Embiid is still in concussion protocol, but has “hurdles to clear” with his other injuries as well. Embiid has an orbital fracture and a torn ligament in his thumb.

His return, even at less than full strength, might put a spring in Philly’s step.

“How much attention he’s gonna draw from everybody when he’s on the floor whether he’s on the perimeter, at the elbow, on the block,” Heat forward Jimmy Butler said. “What he does defensively for those guys is pretty incredible too. I’m not a statistics guy or analytics, but I can tell you, whenever he’s on the floor, they are a much better team. I want him to get right because we want to play against who I call the MVP.”

The Sixers are shooting just 21.9 percent (14 of 64) from 3-point range in the first two games of this series.

Embiid has done only light workouts — very little, in Rivers’ words — since his head injuries April 28 at Toronto. He led the NBA in scoring (30.6). He also averaged 11.7 rebounds and 4.2 assists.

Rivers did not sound optimistic about Embiid returning for Game 3 on Friday.

“We don’t have a big man right now,” Rivers said. “He’s got so many steps to go through (in concussion protocols). I don’t think he’s cleared any of them yet.”

Home court could be a benefit to the Sixers. Philadelphia went 24-17 at home this season, which is identical to Miami’s road record.

Aside from Embiid being out, Niang went 0-for-7 from distance in Game 1 and fouling out in just 10 minutes and five points in Game 2.

“We’ve got to go back to the drawing board,” Maxey said. “We have to figure it out.”

“It’s never easy to get playoff wins,” he said, and players outlined preparations for Game 3 are centered around Embiid suiting up.

“It changes dramatically. You’re talking about MVP talent. So we’ll just have to see. We knew this series was going to shift and it’s going to change pretty dramatically. It’s better for it to change dramatically when we’re able to get a couple wins, but yeah, he changes the equation quite a bit — you have to plan for it.”

Butler and Adebayo are playing well with the staring unit and Tyler Herro remains the one player Rivers said he doesn’t want the 76ers to leave alone.

Miami is playing without starting point guard Kyle Lowry, who is out due to a strained hamstring. Lowry is lobbying to return on Friday, but Spoelstra said the team is being cautious.

“We’re not basing our decisions on whether we are winning or losing,” Spoelstra said. “It’s about what we think is best.”