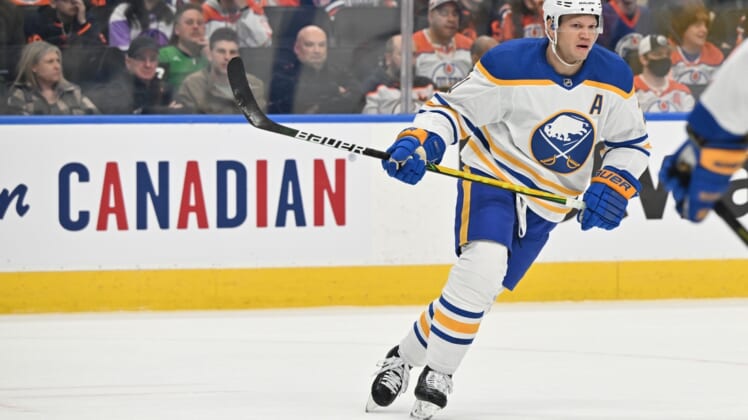 In a season that’s been all about development and growth, the Buffalo Sabres are starting to show what they’ve learned and look to keep rolling when they visit the Chicago Blackhawks on Monday.

The Sabres have played beyond regulation in five straight games, going 3-0-2. They’re coming off a 5-4 overtime loss to the New York Rangers on Sunday, their second straight defeat, a game in which they battled back twice to earn a point.

“We’re starting to figure out how to play every game,” Sabres forward Kyle Okposo said. “And that’s something that’s a very hard thing to do. I’m not saying that we’re there yet, because we’re not. But we’re starting to show some glimpses of it where we’re sticking to our game no matter what.

“I think that today was a testament to that, and I’ve said it a lot, a ton of times, that that’s the mark of the truly good teams in this league, and we’re showing signs of getting there. By no means is it a finished product.”

Buffalo is 7-3-2 in March, one shy of their total win output in December, January and February combined.

It’s also quite a turnaround for the club from this time last year, when they were mired in an 18-game losing streak.

“There’s a lot of things, I think, and it’s tough to really point to one or two things,” Jeff Skinner said of what’s changed. “I think it’s a lot of little things that maybe build up and accumulate. But I think (the game against the Rangers) is a nice example. … Maybe in some other circumstances, an immature team would kind of pack it in maybe. I think we did a good job of staying in it and continuing to press for that next one.”

Skinner is three goals away from the 30-goal mark for the fifth time in his NHL career.

The Blackhawks return home from a three-game road trip looking to rebound after blowing a three-goal third-period lead in a 5-4 overtime loss to the Vegas Golden Knights on Saturday.

“Something to learn from that is adding to our identity and what type of team we’re going to be,” coach Derek King said. “We have to learn from that. When you get back on your heels, turn the tide and tilt the ice the other way.”

Forward Dominik Kubalik hopes to make the most of what he’s learned after returning to the lineup in Las Vegas. Kubalik, who has 12 goals on the season, was a healthy scratch in the previous game against Los Angeles for only the third time in his three NHL seasons. A rookie of the year finalist in 2019-20, the Czech winger had just one goal in 21 games before scoring against the Golden Knights.

“You always want more. You don’t want to stop at one,” Kubalik said. “You want to show that I’m still able to score and create good chances and help the team like that.”

It’s the first meeting between the two clubs this season.