Improving Predators ‘still have better’ to show Avs in Game 3 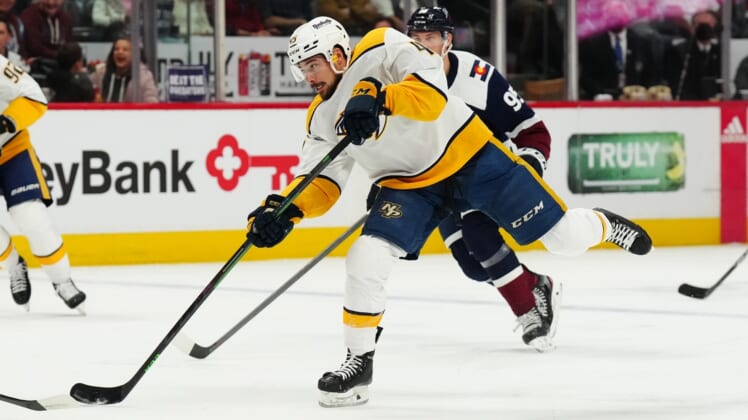 The Nashville Predators are hoping a little home cooking is what the doctor ordered when they host the Colorado Avalanche in Game 3 of their first-round series on Saturday.

Facing a 2-0 series deficit is nothing new for the Predators.

Last season Nashville dropped the first two games of an opening-round series on the road against the Carolina Hurricanes, but came home and squared the series.

“I think we still have better,” defenseman Alexandre Carrier said. “It was better than that first game, but we all know in this room that we’ve got better. They have a hell of a team on the other side as well. You’ve got to respect those guys. I think that the crowd here was a lot as well. We’re excited to go home and get the energy from our crowd and get better.”

Trounced 7-2 in the series opener, the Predators fared better in a 2-1 overtime loss in Game 2, largely due to the play of goalie Connor Ingram. The netminder followed up a stellar performance in relief in Game 1 — allowing two goals on 32 shots — with a 49-save effort Thursday.

In Game 2, he was beaten on the Avalanche’s first shot on goal just over five minutes in and held the fort until Cale Makar struck in overtime. Colorado had him beat with five seconds left in the middle frame, but the goal was disallowed for goalie interference.

“I don’t think it really matters individually at this point,” Ingram said. “I mean, it’s a playoff series. If you don’t come out with wins it doesn’t really add up to much, and that’s the beauty of playoffs. For Game 1, it was 7-2, today it’s 2-1. On Saturday it’ll be a brand new day again. That’s the beauty of it. We can pack this one away and move on to the next one.”

The Avalanche head to Nashville with a chance to put the Predators on the brink and move one game closer to advancing to the second round of the Stanley Cup playoffs for a fourth consecutive season.

But while they’re currently in the driver’s seat, they know it won’t be easy as the visitors.

“It’s going to be a completely different atmosphere,” Makar said. “As a group, we just have to stay together more and just make sure we don’t get frustrated by what they’re going to throw at us. Obviously, momentum doesn’t carry game to game in the playoffs. That’s why it’s the playoffs.”

Makar’s game-winning tally capped off another impressive outing for the 23-year-old. He had 23 shot attempts in the game, 12 of which were on goal while the other 11 were blocked. In Game 1, he had a goal and two assists.

Nathan MacKinnon had eight of his 14 shot attempts reach the goal Thursday, including the opening tally, ranking second for both shots on goal and attempts on the team. The 26-year-old led the way in the series opener with two goals and an assist.

“All year we’ve done a really good job of just staying even-keel,” goalie Darcy Kuemper said. “We’ve dealt with a lot of success in the regular season and we just kind of kept the same approach throughout, and in the playoffs, that’s even more important. … We know the toughest game is always the next one. We’ve got to get ready for that one.”