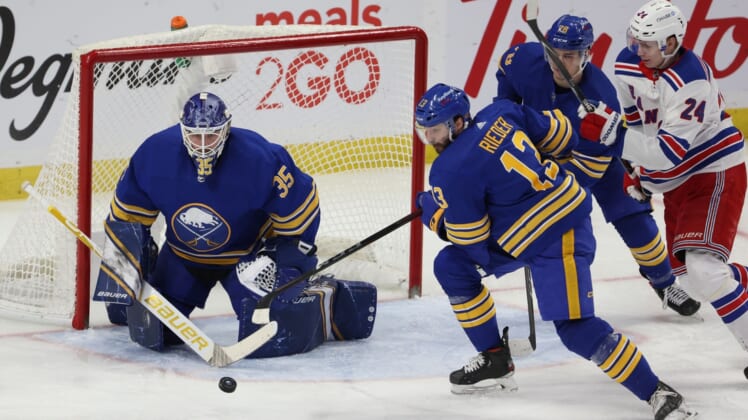 The Buffalo Sabres look to extend their point streak to a season high-tying five games Tuesday when they open a home-and-home series against the New Jersey Devils in Newark, N.J.

The Sabres, who will host the Devils on Thursday, have a 2-0-2 mark in their past four games. The first contest of that stretch — a 4-3 overtime loss to the Philadelphia Flyers on March 29 — capped their franchise-worst 18-game winless skid (0-15-3).

“Even through the losing streak it was so tough, but the boys were sticking together and working hard and trying to play together,” Casey Mittelstadt said Saturday after Buffalo’s 3-2 shootout victory over the New York Rangers. “And then obviously the last few games it’s all come together and we’re playing a lot better. You can feel it on the bench, just the belief and the battle out of everyone. Just the mood in the locker room has been great, so something to build on definitely. We’ve still got a long way to go.”

Mittelstadt extended his point streak to a modest three games by scoring in the first period.

Kyle Okposo set up Victor Olofsson’s tying goal late in the third period. Okposo has seven points (two goals, five assists) in his past seven games after mustering three (all assists) in his previous 22.

The cellar-dwelling Sabres capped their previous five-game point streak with a 4-3 shootout win over the Devils on Jan. 30. They have recorded three wins in the six meetings with New Jersey this season.

The Devils likely are happy that they won’t see the Washington Capitals in the near future. New Jersey was on the wrong end of an eight-game season sweep by the Capitals, courtesy of a 2-1 setback on Friday and 5-4 defeat two days later.

“I would say (Sunday) we probably created the most opportunities we’ve had all year, and at the end of the night, we didn’t win the game,” Devils coach Lindy Ruff said. “You start with your foundation; our foundation was good. We made a few mistakes, yes, but there was a lot of good stuff inside that game.”

Travis Zajac scored twice and defenseman Ryan Murray notched three assists Sunday for the Devils, who have dropped three in a row at home to fall to 4-12-3 at Prudential Center.

Zajac has scored three of his seven goals this season in his past three games. Murray has recorded six of his 10 assists this season and a plus-6 rating in that same stretch.

Mackenzie Blackwood likely will be back in net for New Jersey. He has split four decisions against the Sabres this season and in six career meetings with Buffalo he is 2-3-0 with a 3.56 goals-against average and .892 save percentage .

The Sabres likely will turn to Linus Ullmark, and for good reason. He owns a 7-5-3 record with a 2.44 goals-against average this season while the trio of Carter Hutton, Jonas Johansson and Dustin Tokarski are a combined 1-18-3.

In eight meetings with the Devils, Ullmark is 4-3-0 record with a 2.05 goals-against average and .935 save percentage.