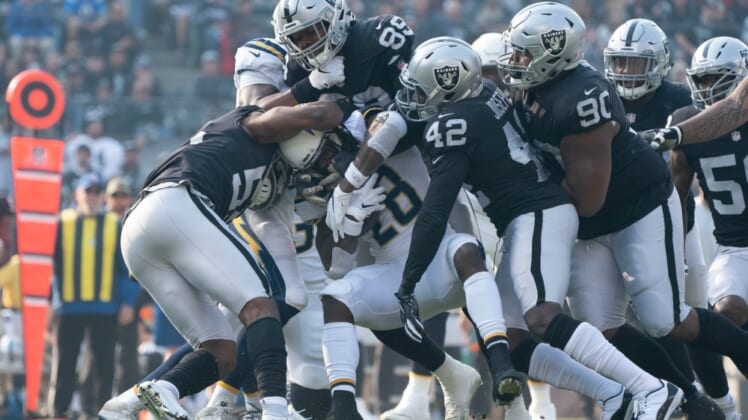 Oakland Raiders head coach Jon Gruden faced the local media and made one message clear to everyone Monday. He said, “there will be changes,” in reference to the defense after an embarrassing performance in which the unit surrendered 552 total yards and 42 points for the second time this season.

The Raiders field the 29th scoring defense, and they’ve allowed the third-most passing touchdowns through 14 weeks. Gruden’s vow for changes seems long overdue, but what can he and his coaching staff do with a roster that’s mostly limited and inexperienced?

At 6-7, the Raiders aren’t mathematically eliminated from playoff contention, but anyone who’s watched this team over the last three games knows the club doesn’t have enough to sneak into a wild-card spot. The Silver and Black have fallen short on both sides of the ball, getting outscored 116-33 during its three-game skid.

With that said, Gruden’s coaching staff should use the last three weeks to experiment with the defense.

Under the current regime, the Raiders have fielded some of the worst defensive units in team history. Last year, they allowed a franchise-high 467 points. This year, we could see a new unflattering record. Thus far, the Silver and Black have allowed 366 points, surrendering an average 38.7 points over the last three outings. You do the math.

Here’s what pushed Gruden over the top. All of the Tennessee Titans’ touchdown drives went at least 74 yards down the field Sunday:

How can Oakland patch up its defense? We’ll take a look at some solutions.

And no, none of the recommendations suggest firing the defensive coordinator. Gruden will likely re-evaluation that position at the end of the season—sorry Paul Guenther pitchforkers.

Joyner possesses the instincts, toughness and agility to play slot cornerback, but he’s a more effective safety on the pro level, which became evident during his best season in 2017. He logged nine pass deflections and three interceptions that year.

“When new coach Sean McVay and Phillips were hired in January, Joyner said he repeated his desire to play safety.”

Joyner has talked openly talked about his preference and why he’s a good fit at safety, per Klein.

“I’m more of a ‘find-ball-see-ball’ guy,” Joyner said. “At safety, I can see the whole field. I’m not in man-to-man every play. I get to use my strengths to run and hit, or run and go get the ball out of the air, things that I like doing.”

The Raiders have utilized Joyner in the slot and seem resistant to use him at safety, though, the change may help his productivity. According to Pro Football Focus, he’s lined up for 516 snaps in the slot, 66 in the box and just one play at free safety.

Phillips runs a different scheme, but the Raiders should at least give Joyner a shot as a primary safety, especially after releasing D.J. Swearinger Tuesday.

If not, the team would likely have to concede that Joyner isn’t a good fit and release him at the end of the season. They wouldn’t owe him any dead money for the remaining three years of his contract, per Spotrac.

Joyner’s move to safety would set off a chain reaction. Someone has to take on duties in the slot. Nevin Lawson has the most experience at the position, but he lacks the ball skills to force turnovers. As we all know, the sixth-year veteran has zero interceptions in 70 games in which he’s played 3,155 career defensive snaps.

Yet, Lawson should be able to man the position a little better than Joyner. He can still knock down a few more passes with good positioning in coverage.

The Raiders have used Daryl Worley as a satellite defender. He’s moved to various spots in the secondary. Here’s a breakdown via Pro Football Focus:

Because of his physicality, Worley could split slot duties with Lawson. He can also line up in the box for run support and compensate for a linebacker group that doesn’t have a solid coverage defender. Titans quarterback Ryan Tannehill went 10-of-10 for 153 yards and a touchdown when targeting Raiders linebackers Sunday, per PFF.

Use Keisean Nixon Against Agile Wide Receivers on Perimeter

Based on matchups, Guenther should mix and match his perimeter cornerbacks opposite Trayvon Mullen.

Worley, who ran a 4.64 40-yard time at his NFL Scouting Combine workout, has a tendency to struggle against speedy pass-catchers on the outside. We just watched Titans wide receiver A.J. Brown burn him downfield Sunday.

Keisean Nixon has some closing speed in coverage, a trait he put on display during the preseason. According to PFF, quarterbacks targeted him 15 times, completing five passes for 37 yards and zero touchdowns.

Preseason production doesn’t always translate to the regular season, but the Raiders need to take a peek at Nixon to find out if he’s a diamond in the rough after his performances in exhibition play. The undrafted rookie out of South Carolina should be closer to taking live reps than rookie fourth-rounder Isaiah Johnson.

Back in November, Gruden gushed about Johnson’s potential as the cornerback prepared to come off injured reserve with a facial fracture, per Vic Tafur of The Athletic.

“Yep. Hopefully he can play against the Chargers,” Gruden said. “We’re excited to see him play. We think he’s got a big upside. Big.”

In Week 10 against the Chargers, Johnson played one defensive snap. This year, he’ll likely see the most action on special teams. The Houston product has only two years of experience at cornerback on the collegiate level and took the field for four preseason snaps.

During Monday’s press conference, Gruden admitted that using Johnson in an expansive role down the stretch might not be the best idea.

“He’s a converted wide receiver,” Gruden said. “He’s not the most experienced corner. He’s missed a lot of time. So, to put him out there in primetime and say let’s go might be fair to him, yet.”

The coaching staff should consider Johnson’s rookie term a “redshirt” year, and work Nixon, who was active throughout the preseason, into the rotation.

Tahir Whitehead has played the second-most snaps on defense (95.27 percent). He’s a thumper-type linebacker that’s quickly going out of style in today’s league with so many athletic tight ends and pass-catching running backs finding open space in the middle of the field.

For the most part, against the run, Whitehead is a solid defender who can bring down ball-carriers. While playing 825 defensive snaps, he’s missed nine tackles, per PFF, which is a small percentage considering the 29-year-old barely comes off the field.

However, quarterbacks have targeted Whitehead 49 times for 40 completions, 541 yards and seven touchdowns, per PFF. If we’re putting that into perspective, no Raiders wide receiver has more than five touchdown receptions this season. Signal-callers know where Whitehead is in coverage, and they go after him with great success.

In fairness to Whitehead, the Raiders’ entire linebacker corps has struggled in pass coverage this season. The team released Preston Brown Tuesday. He played nine games with the Cincinnati Bengals before signing with Oakland November 18th.

*1 target, 1 reception, 6 yards with the Raiders

Because Oakland has no one on the second level of the defense who’s shown quality coverage on passing downs, Worley, as noted above, should see more time in the box as an experiment.

Defensive end Benson Mayowa has logged all of his pass-rushing snaps on the left side, which explains his limited role, playing just 28.29 percent of defensive plays this season.

Nevertheless, Mayowa has provided pressure with limited opportunities. He’s second on the team in sacks (seven), which is a personal best for him in the category.

On the flip side, Mayowa has finished each of the previous four outings with a blank stat sheet, zero tackles through 57 defensive snaps. The last time we saw him in an impactful performance, he registered 1.5 sacks against the Chargers in Week 10.

Because Maxx Crosby can line up on both sides of the defensive line, Mayowa could see extra snaps on the left side to add some bite to the pass rush. The Raiders certainly need it, ranking 29th in quarterback pressures (96) and tied for 25th in sacks (27).

Obviously, the coaching staff wants a spark out of the defensive line. So, if Mayowa sees more time on the left with Crosby on the right, the Raiders could force opposing quarterbacks into uncomfortable situations, potentially leading to errant throws. The unit needs a stronger push up front to help the secondary.

Week 15 vs. the Jacksonville Jaguars

Gruden doesn’t want another embarrassment on the field for the Raiders’ home-field season finale and the last game at the Oakland Coliseum before the team moves to Las Vegas. He’s dialed in to win Sunday’s game. With that said, we shouldn’t expect a full-blown football experiment on defense for the upcoming matchup.

However, the coaching staff should gradually implement some changes as the season winds down. A lot of the players on defense won’t make it to Vegas. Some of them should view the final three weeks as an audition for next season.

Looking ahead, the Raiders have the cap space, a projected $71.1 million, and 2020 draft capital (five selections in the top 100) to add an influx of talent on defense. For now, it’s important to find out if guys like Worley and Joyner are in the team’s future plans. Does Mayowa get another year? Will any of the linebackers make the roster next term?

With little time, Gruden wants changes, but the Raiders need answers as well.