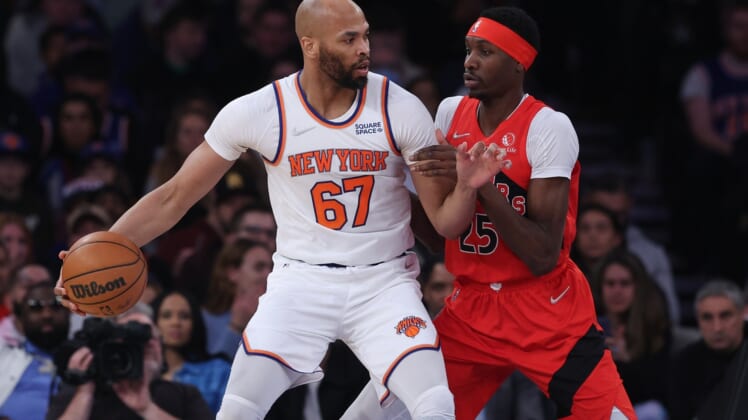 Immanuel Quickley and Obi Toppin each capped their season-ending surges in style Sunday night, when Quickley posted a triple-double and Toppin scored a career-high 42 points as the host New York Knicks beat the Toronto Raptors 105-94 in the regular-season finale for both teams.

The Raptors (48-34) are locked into the fifth seed in the Eastern Conference and will open the playoffs against the fourth-seeded Philadelphia 76ers. The Knicks (37-45), who ended a seven-year postseason drought last spring, finished 11th in the East, six games out of a spot in the play-in tournament.

The Raptors and Knicks both had plenty of big names on the bench in the meaningless finale. Toronto’s Fred VanVleet (right knee) and Pascal Siakam sat out, while RJ Barrett — who sprained his right knee in Friday’s win over the Washington Wizards — was sidelined for New York along with Julius Randle (right quad), Mitchell Robinson (non-COVID illness), Quentin Grimes (right knee) and Miles McBride (right knee).

Quickley and Toppin took advantage of the increased playing time down the stretch. Quickley’s triple-double — he finished with 34 points, 12 assists and 10 rebounds — was his second in the last four games.

Toppin didn’t score more than 19 points in any of his first 129 NBA games before scoring at least 20 points four times in the last five games. He had 20 points apiece against the Orlando Magic and Cleveland Cavaliers on April 2-3 before collecting 35 points against the Washington Wizards on Friday night.

Toppin also pulled down the game’s final rebound Sunday to finish with his third career double-double.

Chris Boucher scored 21 points off the bench for the Raptors while Gary Trent Jr. had 17 points and Malachi Flynn added 10 points.

The Knicks went on a 14-4 run in the third to open a 67-58 lead, after which the Raptors ended the quarter with a 14-6 surge. Toronto took a pair of three-point leads early in the fourth before Quickley scored five points — including the tie-breaking 3-pointer with 7:58 left — as New York went ahead 87-80. The hosts led by as many as 14 later in the fourth.