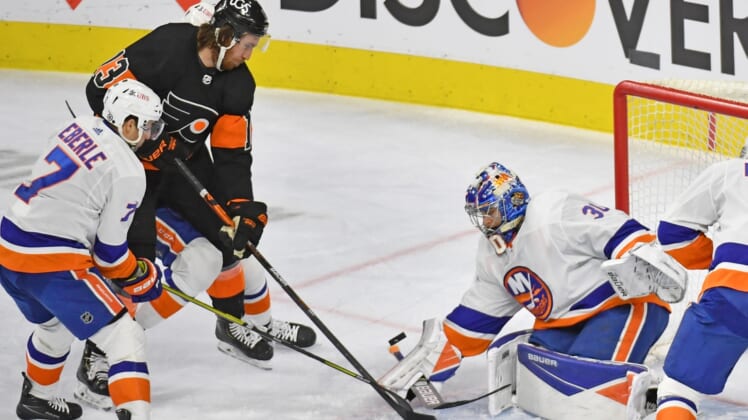 Defenseman Nick Leddy scored 2:23 into overtime and Ilya Sorokin made 30 saves to lift the visiting New York Islanders to a 1-0 victory over the Philadelphia Flyers on Sunday.

Leddy scored after his shot deflected off the stick of Flyers defenseman Travis Sanheim and into the net. Leddy’s goal was his second of the season and snapped the Islanders’ scoring drought of 159 minutes, 27 seconds dating back to Travis Zajac’s tally 2:56 into the second period of Thursday’s 4-1 loss to the Boston Bruins.

Seven of the eight games of the season series between the Islanders and Flyers were decided by one goal, with six of the contests extending beyond regulation. Four of New York’s five wins came after regulation, while Philadelphia secured two of its three victories in overtime.

Sorokin’s shutout was his third of his rookie season for the Islanders, who snapped a four-game road losing skid. He improved to 5-0-1 against the Flyers this season.

Prior to the game, Flyers forward Oskar Lindblom skated a lap by himself before the rest of his teammates joined him on the ice wearing his No. 23 purple and black warmup jersey. The move was a touching tribute on “Hockey Fights Cancer” night to Lindblom, who is now cancer-free after being diagnosed with Ewing’s sarcoma in December 2019.

The Flyers held a 23-13 edge in shots on goal over the first two periods before the Islanders benefited from a pair of power-play opportunities to hold a 13-6 advantage in the third. Elliott stopped Casey Cizikas on the doorstep as well as defenseman Andy Greene’s blast from the point to keep New York off the scoreboard.

New York nearly opened the scoring early in the second period as Cizikas exited the penalty box and quickly ignited a 2-on-1 rush. Cizikas elected to keep the puck, however his shot was denied by the right pad of Elliott.

Sorokin kept the game scoreless after denying Sean Couturier on a breakaway 7 1/2 minutes into the third period.