Illinois counting on running back Chase Brown in opener with Wyoming 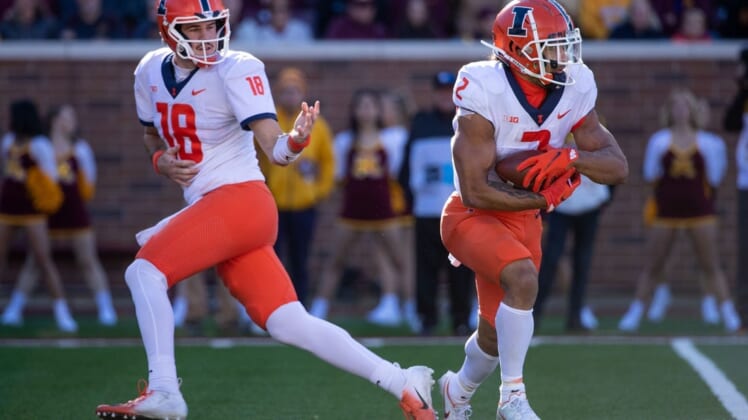 The identity of Illinois’ starting quarterback for its season opener Saturday in Champaign, Ill. against Wyoming might not be known until the offense takes the field for the first time.

Given how second-year coach Bret Bielema likes to play the game, it probably doesn’t matter who gets the call between Art Sitkowski and Syracuse transfer Tommy DeVito.

The Fighting Illini are going to be a run-first team, just like Bielema’s teams were at Wisconsin and Arkansas. And with the 1-2 punch of junior Chase Brown and sophomore Josh McCray, why not?

Brown picked up 1,005 yards last year, averaging nearly six yards per carry, while McCray added 549 and averaged almost five yards an attempt. And they could have been even better had Illinois gotten more accurate passing from Sitkowski or Brandon Peters, who combined to hit just 52.3 percent of their 317 attempts.

If Sitkowski or DeVito can at least be efficient/adequate, the Illini could improve from a 5-7 mark last year.

“We know who the guys are,” Bielema said after his team’s final preseason scrimmage on Aug. 19. “I think there are still some battles offensively and defensively.”

Wyoming is coming off a 7-6 season that included a 52-38 win over Kent State in the Famous Idaho Potato Bowl, enabling it to close on a winning note. The Cowboys have been tabbed for a fifth place finish in the Mountain West Conference’s Mountain Division, where Boise State and Air Force are picked to finish 1-2.

Wyoming boasts a good running back in junior Titus Swen, who gained 785 yards and averaged nearly six yards per attempt last year. Its leader on defense is linebacker Easton Gibbs, a sophomore who’s the team’s top returning tackler after notching 90 in 2021.

Cowboys coach Craig Bohl was pleased with his offensive line in the preseason.

“We’re making some progress there – enough that we’re going to be able go into the Illinois game and finalize our depth chart without having a lot of musical chairs,” he said.

Saturday is the first matchup between the schools.