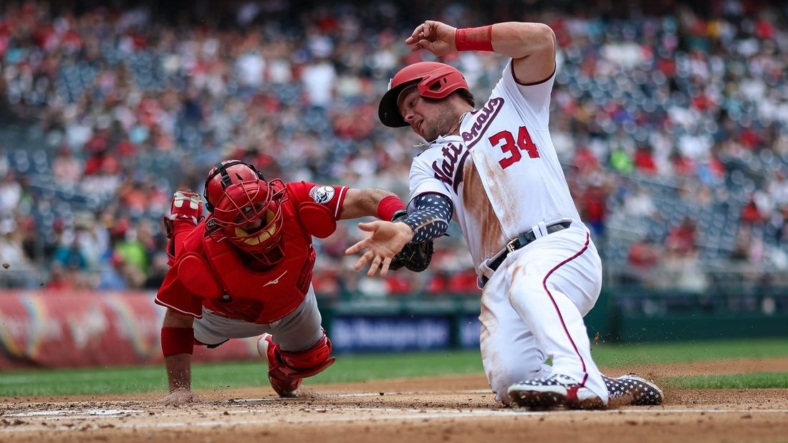 Ildemaro Vargas’ tiebreaking home run in the fifth inning lifted the Washington Nationals to a 3-2 victory over the visiting Cincinnati Reds on Sunday.

Vargas’ solo homer, combined with six surprisingly strong innings from Patrick Corbin, prevented the Nationals from being swept by the Reds, who had an early 2-0 lead.

Corbin (5-17) allowed two runs — one earned — on four hits with five strikeouts and a walk for the Nationals, who had been outscored 13-5 in the series’ first two games.

The victory was Washington’s second in their past seven games and Corbin’s first since June 28, when he allowed a run over eight innings against the Pittsburgh Pirates.

Hunter Harvey pitched a scoreless seventh and Carl Edwards Jr. tossed a perfect eighth before Kyle Finnegan retired the side in the ninth for his eighth save of the season.

Reds rookie left-hander Nick Lodolo (3-5) pitched well in the loss, allowing three runs on five hits with five strikeouts and a walk before being relieved by Art Warren to open the eighth.

Jonathan India went 2-for-4 with a run for the Reds, who lost for the fifth time in their past seven games.

The Reds took a 1-0 lead in the first inning when Kyle Farmer’s RBI groundout scored India, who had led off with a single and advanced to third on Alejo Lopez’s single misplayed in right by Joey Meneses.

Stuart Fairchild opened the second by blasting Corbin’s sinker 432 feet over the center field fence for a 2-0 lead before the left-hander retired the next three hitters to escape further damage.

The Nationals tied the game in fourth.

After Cesar Hernandez led off with a double, Meneses and Luke Voit were hit by pitches to load the bases, before Lodolo walked Nelson Cruz to force Hernandez home. Lodolo got Lane Thomas to line out to third before he struck out CJ Abrams. But Riley Adams singled up the middle to score Meneses and tie the game, with Voit getting thrown out at home.

Washington took the lead for good in the fifth, when Vargas led off the frame by delivering Lodolo’s sinker over the left-field fence for his lone hit in three at-bats.