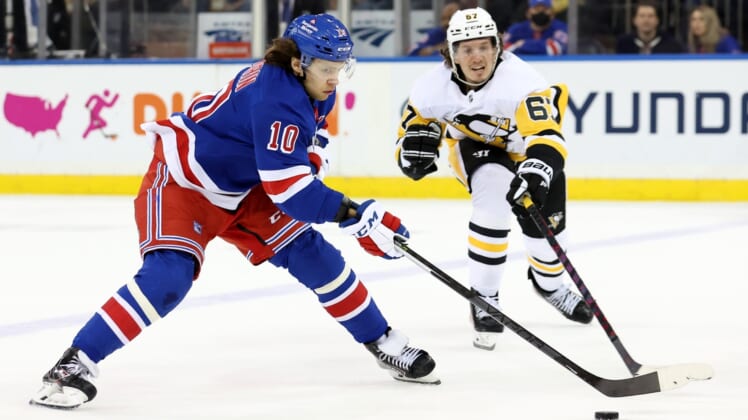 It was the sixth career shutout, fourth of the season and first against Pittsburgh for Shesterkin, who had lost two straight starts and avoided hit first three-game losing skid of the season.

It was the final meeting of the regular season for the Rangers (46-20-6, 98 points) and Penguins (41-21-10, 92 points). The Metropolitan Division foes each have 10 games remaining and could well face each other in the opening round of the playoffs.

It was also the third meeting in less than three weeks between the clubs, with the Rangers winning the previous two by a combined 8-3.

Frank Vatrano, Artemi Panarin and Dryden Hunt scored for the Rangers, who won their second straight.

The Penguins have lost three in row and six of of their past eight (2-5-1).

Pittsburgh goaltender Tristan Jarry, who lost his third start in a row, made 21 saves.

Pittsburgh played without captain and leading scorer Sidney Crosby, defenseman John Marino and forward Radim Zohorna, who all had a non-COVID-10 illness, according to the team.

The first period was evenly played, with New York holding a 10-9 shots advantage, but with no goals.

Vatrano gave the Rangers a 1-0 lead 24 seconds into the second. On a rebound of a Chris Kreider shot, Vatrano sent a backhander from 10 feet past a sprawling Jarry. He has nine goals in 16 career games against the Penguins.

At 9:47 of the second, Panarin, playing in his 500th career game, picked up his 20th goal of the season to make it 2-0. Coming across the slot, he lifted a backhander under the crossbar.

New York nearly got a late goal in the second, but Mika Zibanejad’s shot went in the net just after the clock wound down.

Hunt added an empty-net goal with 38 seconds left in regulation.