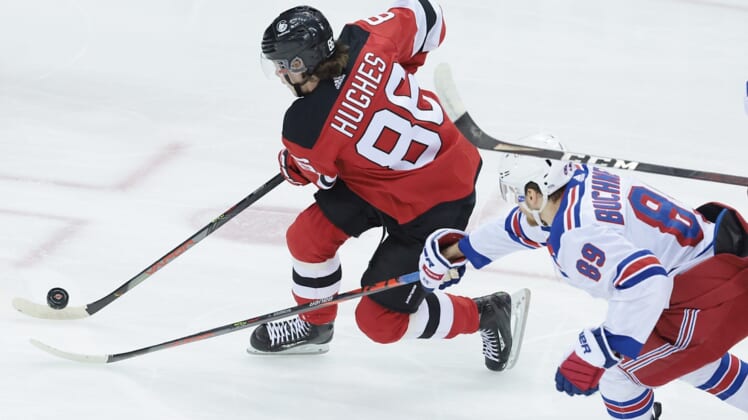 Mika Zibanejad scored in the first period, Artemi Panarin tallied in the third and Igor Shesterkin made 27 saves for his first career shutout and the visiting New York Rangers beat the New Jersey Devils 3-0 Tuesday night in Newark, N.J.

The Rangers began a stretch of four straight games against the Devils by improving to 10-4-4 in their past 18 games. New York entered Tuesday four points behind the Boston Bruins for the fourth and final playoff spot in the East Division. The Bruins were hosting the Buffalo Sabres on Tuesday.

His latest goal came on a dynamic play when he finished off a breakaway by switching from his backhand to his forehand after speeding past New Jersey defenseman Will Butcher.

Zibanejad’s goal occurred after the Rangers were stopped twice on breakaways in the opening minutes. He nearly got a second goal with about 13 1/2 minutes left when MacKenzie Blackwood made a point-blank save but a little over a minute later, the Rangers extended their lead on Panarin’s 13th goal of the season.

Panarin made it 2-0 when he finished off a cross-ice pass from Filip Chytil by firing a one-timer from the right circle that beat Blackwood to the side and went into the vacated left side of the net.

Shesterkin improved to 5-2-2 in nine games since returning from a groin injury he suffered last month in New Jersey. He stopped Jesper Bratt less than a minute in, made a point-blank stop on Nico Hischier with about three minutes left in the second and then dove to smother a long shot by defenseman Ty Smith with 6:55 remaining.

Shesterkin then finished it off with four saves on a New Jersey power play in the final 79 seconds.

Defenseman Adam Fox collected two assists for the Rangers, who have won the past three meetings and outscored New Jersey 15-4

Pavel Buchnevich added an empty-net goal that was the 20,000th goal in team history.