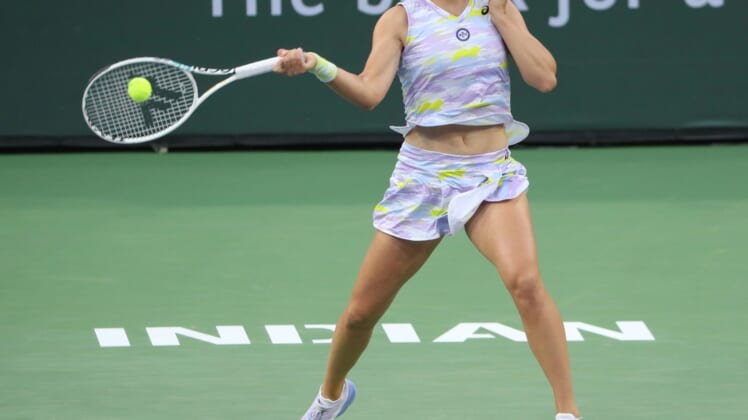 “I was getting tired a little bit so I wanted to make it quick,” Swiatek said.

Swiatek was still complimentary toward her opponent, saying, “Madison played a great tournament. Her whole season is pretty great. I didn’t really know if I was going to be able to push back her speed, because she can play pretty fast. I wanted to stay low on my legs and control it a little more.”

Halep converted all five of her break points and saved all three of Martic’s break opportunities.

“I feel like I played my best tennis so far this year,” Halep said. “I knew it was going to be a tough match against her. … Today I felt great. I’ve been on a mission. I just wanted to be focused on what I had to do.”

Swiatek and Halep will square off in a semifinal match on Friday, with Halep holding a 2-1 edge in their prior meetings.

“She’s playing some good tennis right now,” Swiatek said of Halep. “She’s really consistent. … She’s in great shape. It’s going to be a tough match — it’s always like that against Simona. For me, it’s going to be a test. I can see how much I’ve improved, because I feel like my tennis is changing.”

Halep said of Swiatek, “Tough, tough match, because she’s playing the best tennis of her life. She’s in the best moment. I expect a really tough one. But I’m here in the semifinal, so I’ll take that. I’ll just try my best.”