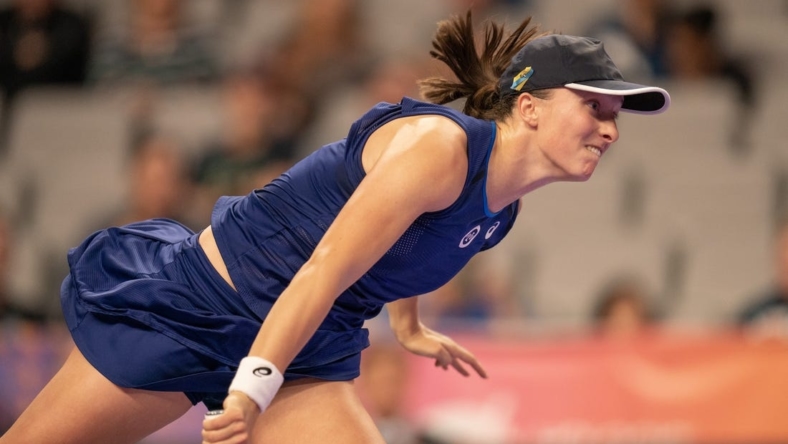 Top-seeded Iga Swiatek of Poland strolled into the semifinals of the WTA Finals with a 6-3, 6-2 win over sixth-seeded Caroline Garcia of France on Thursday.

Swiatek, who improved to 2-0 in the event, wrapped up first place in the Tracy Austin Group. The other semifinal berth from the group will come down to the last day of round-robin action on Friday.

Eighth-seeded Daria Kasatkina of Russia won the other Thursday match 7-6 (6), 6-3 over fourth-seeded Coco Gauff of the United States. Kasatkina and Garcia are both 1-1, meaning their Friday matchup will determine the group’s second playoff bid.

Gauff fell to 0-2 and was eliminated from contention.

The season’s eight top players were divided into the Nancy Richey Group and the Tracy Austin Group for round-robin play. The winner of each group will play the runner-up from the opposite group in the semifinals Sunday, with the victor in those two matches heading to the final on Monday.

The prize pool is $5 million, and an unbeaten champion would earn $1.68 million.

Swiatek dominated the key moments against Garcia, saving four of the five break points on her own serve and converting five of her six break-point opportunities.

Garcia said of Swiatek, “The thing is: You have to take some time away from her. Try to be aggressive, to push her out of her comfort zone. But most of the time, she does it better than you. She’s really strong, really solid, doesn’t give you a lot of unforced errors.

“As soon as she gets a little bit more space or more of an angle, she makes you feel you’re slower, playing bad, whatever.”

Kasatkina and Gauff each lost the game while serving for the first set, leading to the tiebreaker. When Kasatkina wound up winning that set, that was a superb omen for her: She ended up improving to 29-0 this year after going up by a set.

While Gauff finished with a 25-10 edge in winners, she more than offset that my committing 34 errors to Kasatkina’s 10.

The Nancy Richey Group concludes on Friday with No. 2 Ons Jabeur of Tunisia, No. 3 Jessica Pegula of the United States and No. 7 Aryna Sabalenka of Belarus all vying to join No. 5 Maria Sakkari in the semifinals. Sabalenka (1-1) will oppose Pegula (0-2) before Sakkari (2-0) squares off with Jabeur (1-1).