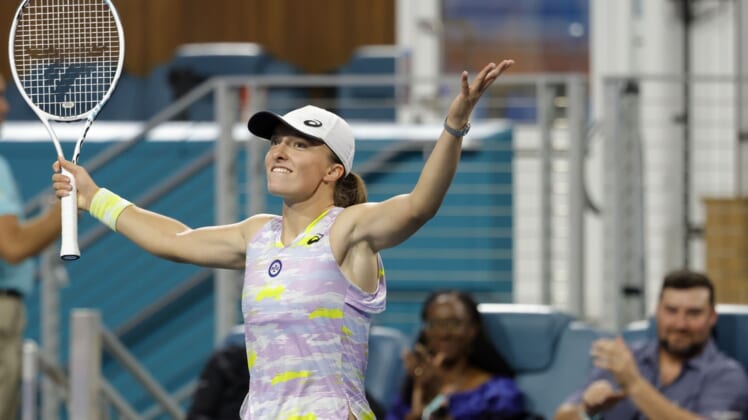 Soon-to-be World No. 1 Iga Swiatek needed just 65 minutes Sunday night to cruise to a 6-0, 6-3 victory over American Madison Brengle and advance into the Round of 16 at the Miami Open.

The Polish standout hit 25 winners compared to four for Brengle in posting her 13th consecutive victory. The second-seeded Swiatek will officially become the No. 1 player in the world on April 4 after the recent retirement of Australian great Ash Barty.

“I feel like I’m in a good place with my tennis and I’m focusing on that,” Swiatek said during her on-court interview when asked about the ranking. “I know the ranking can be pressure, but on the other hand, when I was climbing up and I entered Top 10 and Top 5, I felt the same feeling, and right now I don’t want to repeat that. So I just focus on my game.”

Swiatek won the opening set in 25 minutes. She had 12 winners in the set while Brengle had one.

Swiatek will next face American Coco Gauff, who registered a 7-6 (1), 7-5 triumph over China’s Shuai Zhang.

The two players have met once before when Swiatek won 7-6, 6-3 in the semifinals in Rome last May while on her way to winning the title.

The 14th-seeded Gauff converted 73 percent of her first-serve points on Saturday while winning in one hour and 49 minutes.

“Today was tough,” the 18-year-old Gauff said. “I wasn’t playing my best in some moments, but I was just trying to hang in there and put the ball in the court.”

Fifth-seeded Paula Badosa of Spain advanced with a crisp 6-3, 6-2 victory over Yulia Putintseva of Kazakhstan.

Badosa won 78.8 percent of her break points while prevailing in 81 minutes.

“I played against her a few months ago, so I knew it was a very physical and tactical match,” Badosa said. “I studied her a little bit to know where she’s going to throw the ball (on her serve).”

Badosa will next face 16-year-old Russian Linda Fruhvirtova, who is the first player under 17 to reach the fourth round in Miami since Maria Sharapova and Tatiana Golovin both did so as 16-year-olds in 2004.

“Of course I didn’t want it to end this way, because Vika is one of the players I grew up watching, and she’s definitely one to look up to,” Fruhvirtova said in her interview on court. “I just wish that she feels better as soon as possible.

“I don’t think I’ve ever played in such a big stadium, and these are the memories I’m going to remember forever.”

Pegula, who had two aces and overcame five double faults, will next face Ukraine’s Anhelina Kalinina.

No. 20 seed Veronika Kudermetova defeated American Shelby Rogers 6-1, 7-5. The Russian will next face 28th-seeded Petra Kvitova of the Czech Republic.