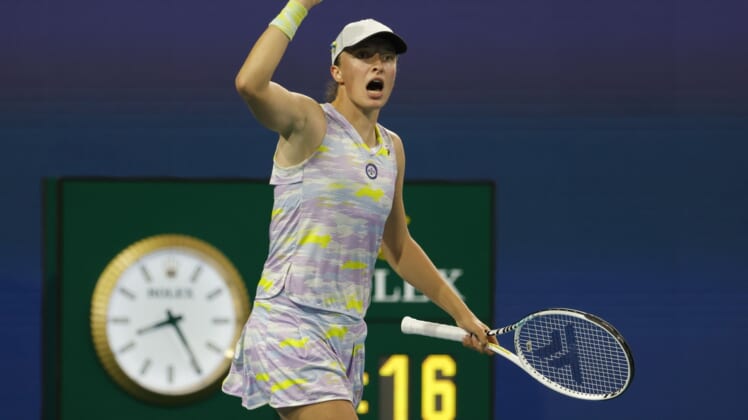 Knowing she will rise to the world’s No. 1 ranking next week hasn’t caused Iga Swiatek to ease off on court.

The second-seeded Polish player routed 28th-seeded Petra Kvitova of the Czech Republic 6-3, 6-3 on Wednesday in the quarterfinals of the Miami Open for her 15th consecutive win.

Swiatek won her past two events, in Doha, Qatar, and Indian Wells, Calif. Now she is through to the semifinals in Miami, where she will meet 16th-seeded Jessica Pegula. The American advanced when fifth-seeded Paula Badosa of Spain was forced to retire due to illness while trailing 4-1 in the first set.

“I want to use the confidence that I built since the beginning of Doha,” Swiatek said. “I think I’m on a roll and I want to use that. Having that kind of streak got pretty tricky, but I’m pretty glad that I could play well, that I’m healthy, and that I can compete against players like Petra. She’s a legend.”

Swiatek never faced a break point against Kvitova, and she converted three of her seven break opportunities. While Swiatek won 67 percent of her second-serve points, Kvitova wound up at 28 percent in that category.

“From the beginning, I knew that I had to keep up with the pace because she plays really fast,” said Swiatek, who will rise to No. 1 following the retirement of Australia’s Ash Barty. “I wanted to stay low on my legs and the first serve was the key. I don’t know if I had many winners, but I wanted to build up positive energy from her mistakes. I’m glad that I stayed focused and I did the tactics from A to Z.”

Pegula lost her serve to open her match before taking the next four games prior to Badosa’s retirement.

“I think from her last match I could tell that she probably wasn’t going to be 100 percent by today,” Pegula said postmatch. “I have no idea what happened or how she was feeling or if she recovered or if it was quick. It’s just hard to know in those situations. It can be kind of awkward. …

“Sometimes you just never know how someone is going to react when they get out there, even though you know they are not feeling well.”

Badosa later tweeted, “So sorry I had to retire today. Been struggling with illness since the last match the other day. Tried everything to recover but wasn’t enough. I’ll take some days to recover well and prepare for clay court season. Thank you”

So sorry I had to retire today. Been struggling with illness since the last match the other day. Tried everything to recover but wasn’t enough. I’ll take some days to recover well and prepare for clay court season. Thank you

The other semifinal match on Thursday will feature 22nd-seeded Belinda Bencic of Switzerland and Naomi Osaka of Japan.