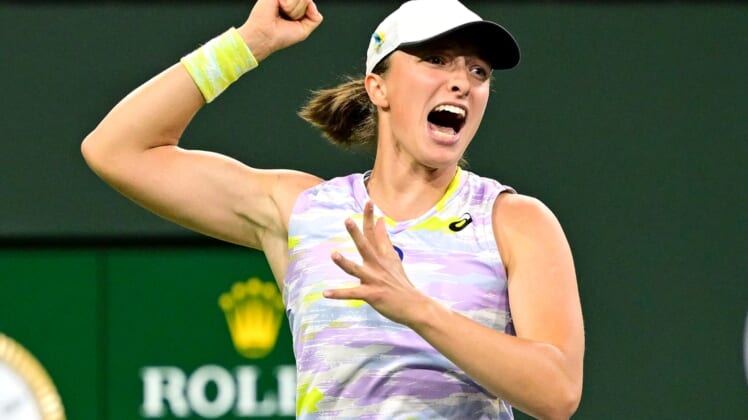 Iga Swiatek will rise to a career-high ranking next week.

In the meantime, she must attend to most important matters.

The third-seeded Poland native beat 24th-seeded Simona Halep of Romania 7-6 (6), 6-4 in the semifinals of the BNP Paribas Open on Friday in Indian Wells, Calif.

Her opponent in the Sunday final will be sixth-seeded Maria Sakkari of Greece, who eliminated the defending champion, fifth-seeded Paula Badosa of Spain, 6-2, 4-6, 6-1.

Swiatek, 20, is ranked fourth in the world, but come Monday, she will move to No. 2 or No. 3. She is riding a 10-match winning streak, having arrived in the Southern California desert after claiming a championship in Doha, Qatar, last month.

Her streak looked in jeopardy during the first-set tiebreaker against Halep, who had two set points. However, Swiatek claimed the next four points to win the set.

Halep again moved in front in the second set, serving with a 4-2 lead, but Swiatek won the match’s final four games to advance.

Halep said of the defeat, “It was a tough one. “She played really well and I had some chances, but I didn’t take them. So, yeah, it was a pretty solid match, and all the credit to her because she was more focused in the important moments.”

Sakkari, 26, is through to her second final of the year, having lost the title match at St. Petersburg, Russia, to Estonia’s Anett Kontaveit in February. She also fell against Swiatek in the Doha semifinals, 6-4, 6-3.

Defeating Badosa prompted brought out an emotional display from Sakkari.

“I worked my entire life to get to these late stages of the tournaments,” Sakkari said. “I know it looks maybe silly to someone — it’s not like I won the tournament, I’m in the final — but it means a lot to me.”