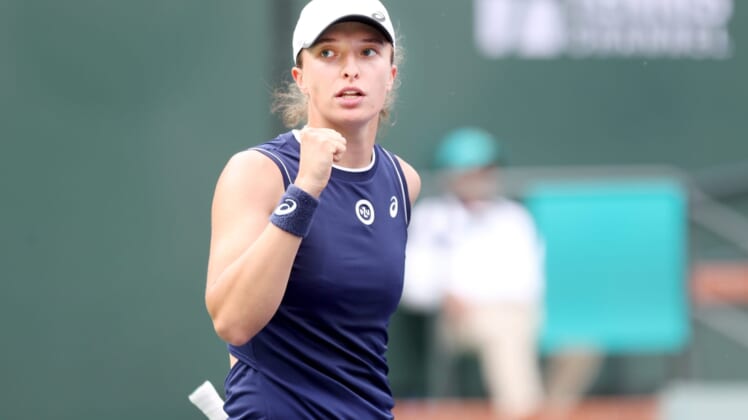 Second-seeded Iga Swiatek of Poland won 79.2 percent of her first-serve points on Friday while cruising to a 6-1, 6-3 victory over Croatia’s Petra Martic in second-round play at the BNP Paribas Open in Indian Wells, Calif.

Swiatek won nine of the first 10 games en route to the 71-minute victory.

“I just wanted to be aggressive from the beginning and not let her play her game,” Swiatek said. “In the second set, I lost focus for one game and she broke me pretty fast, so I knew I just had to keep going and not stop for a second time.”

Swiatek will next face 25th-seeded Veronika Kudermetova, who posted a 6-2, 6-3 victory over fellow Russian Liudmila Samsonova.

Fourth-seeded Elina Svitolina of Ukraine notched a 6-2, 7-5 victory over the Czech Republic’s Tereza Martincova. Ninth-seeded Anastasia Pavlyuchenkova of Russia rolled to a 6-3, 6-1 win over American Madison Keys, and No. 11 Simona Halep of Romania registered a 7-6 (2), 6-1 victory over Marta Kostyuk of Ukraine.

Latvia’s Jelena Ostapenko, seeded 24th, rolled to an easy 6-3, 6-0 win over Su-Wei Hsieh of Taiwan, while No. 27 Victoria Azarenka of Belarus advanced when Magda Linette of Poland retired with a ankle injury while trailing 7-5, 3-0.