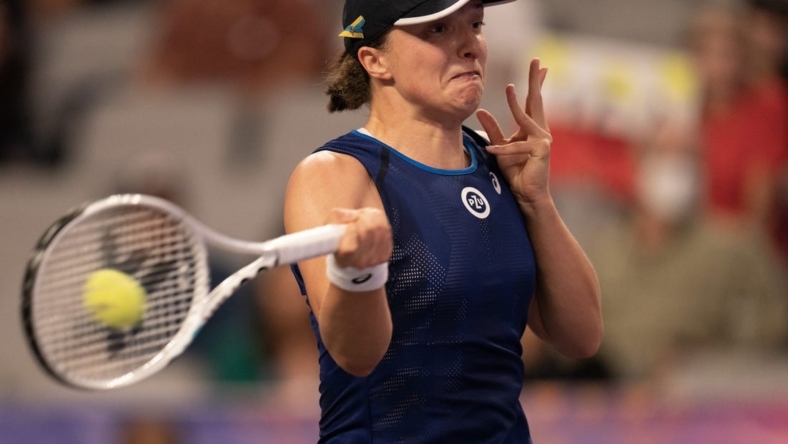 Iga Swiatek and Caroline Garcia cruised through opening victories at the WTA Finals in Fort Worth, Texas, on Tuesday, neither spending 90 minutes on the court.

The season’s eight top players were divided into the Nancy Richey Group and the Tracy Austin Group for round-robin play. The winner of each group will play the runner-up from the opposite group in the semifinals, with the victor in those two matches heading to the final on Monday.

The prize pool is $5 million, and an unbeaten champion would earn $1.68 million.

Swiatek won 82 percent of her first-serve points and staved off all three break points she faced. She also converted three of her seven break-point chances.

Swiatek won the first three games of the match, which she said was crucial.

“I felt like (with a lead) I can really play aggressively, but on the other hand, with these balls here, you have to be really careful,” she said. “So I wanted to balance it, and I think I did that pretty well at the beginning and that gave me confidence for the rest of the match. I’m happy that we got used to the conditions pretty quickly.”

Garcia got past Gauff in a rematch of a U.S. Open quarterfinal match this summer, also won by Garcia.

Gauff won just 54 percent of her first-serve points, while Garcia was at 77 percent in that category.

The players exchanged service breaks in the first two games of the match, and Garcia claimed the first set by breaking in the final game.

The second set also saw an early tradeoff of breaks, but Garcia broke again right away for a 4-2 lead and served out the match.

The Nancy Richey Group returns to action on Wednesday. No. 5 Maria Sakkari of Greece and No. 7 Aryna Sabalenka of Belarus, who both won their openers on Monday, will square off, as will the Monday losers, No. 2 Ons Jabeur of Tunisia and No. 3 Jessica Pegula of the United States.