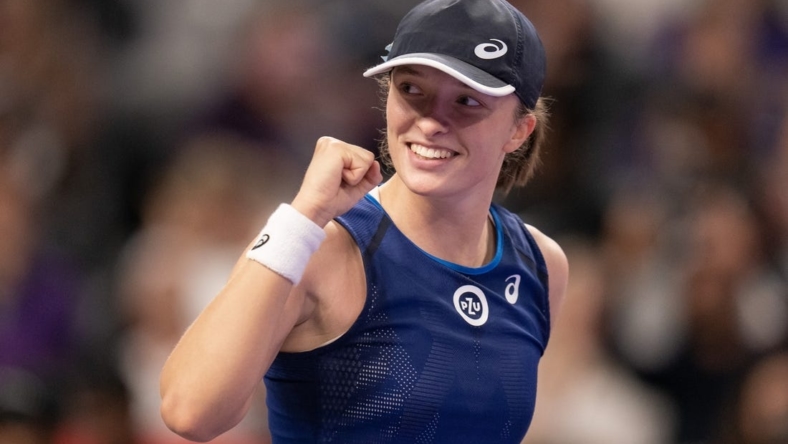 Top-seeded Iga Swiatek of Poland dominated Coco Gauff of the U.S. on Saturday to officially claim a semifinal berth in the championship match of the WTA Finals in Fort Worth, Texas.

The tourney featured the top eight players on the WTA Tour.

Swiatek, the top-rated player in the world, needed only 70 minutes to finish off Gauff, winning 6-3, 6-0. For winning the Tracy Austin Group at 3-0, she will take on Aryna Sabalenka (2-1) of Belarus, the runner-up in the Nancy Richey Group.

France’s Caroline Garcia won Saturday’s other match. She needed three sets, including a third-set tiebreaker, to dispose of Daria Kasatkina of Russia 4-6, 6-1, 7-6 (5). Garcia finished 2-1 in the Austin Group and will take on Maria Sakkari of Greece, who went 3-0 to win the Richey Group.

Swiatek, who dominated the match stats befitting the final score, broke away from a 3-3 tie in the first set by breaking Gauff twice in a row, the second time to clinch the first set.

The second set lasted only 28 minutes.

“It’s the last tournament of the season, so I have kind of nothing to lose. I don’t have to worry what I’m going to do next. So, yeah, for sure, I’m giving it 100 percent, physically and mentally,” Swiatek said.

In the first match, both players had trouble holding serve. Kasatkina broke Garcia three times and Kasatkina lost hers twice, but the Russian held serve to clinch the first set 6-4.

Garcia recovered to hold serve throughout the second set while breaking Kasatkina, the second time to take a dominating 5-1 lead before clinching the set.

Each player lost her serve twice in the third set, and the service difficulties continued into the tiebreaker. They lost serve seven times, including four in a row at one point.

Garcia missed a chance to win the tiebreaker when Kasatkina down 6-4, broke her serve on match point. But Garcia returned the favor to win 7-5.

Garcia said that advancing in the tournament is “definitely a great achievement.”

“I was already really proud to be in the Top 8. I don’t really know if I realize that this is the semifinal tomorrow,” Garcia said. “It proves that this year was definitely a good year. I started very far from the Top 10, the Top 8, and I make my way to it. Today, it’s one more thing that proves my game style is working and I have to keep going that way.”

Garcia finished with four aces to one for Kasatkina, and the Frenchwoman scored 42 winners to 16 for the Russian.