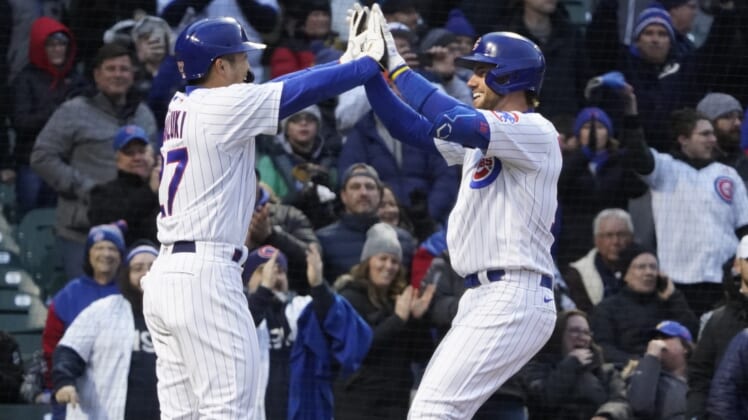 Ian Happ rapped a tiebreaking, seventh-inning single as the Chicago Cubs opened a seven-game homestand Monday night with a 4-2 win over the Tampa Bay Rays.

After Tampa Bay tied the game at 2 in the fifth, reliever Jason Adam (0-1) hit Seiya Suzuki and walked Jonathan Villar to open the seventh. Happ later hit an RBI single to score Suzuki. Frank Schwindel added insurance with a solo homer in the eighth.

Keegan Thompson (2-0) pitched 3 2/3 innings of one-hit, scoreless relief with five strikeouts. David Robertson worked around a two-out walk in the ninth to go 4-for-4 in save situations.

Patrick Wisdom hit a homer, and Nick Madrigal went 2-for-4 as the Cubs won their second consecutive game.

Suzuki was 2-for-3 with two runs scored to tie the club record (9 games) for the longest hitting streak by any Cub to open a career over the past 100 years. Andy Pafko set the record in 1943.

Kyle Hendricks started for the Cubs, and he lasted 4 1/3 innings, allowing two runs on five hits. The right-hander fanned six and walked two.

The Rays’ Josh Lowe went 2-for-4 with an RBI and a stolen base, and Yandy Diaz had two hits.

Starting pitcher Shane McClanahan hurled six innings and 80 pitches. The left-hander allowed two runs (one earned) and four hits, while striking out a career-high nine without a walk.

With the temperature in the 30s on a blustery night that seemed more fitting for football, the Rays’ recent sloppy defensive play surfaced again in the second when shortstop Taylor Walls was charged with a leadoff throwing error.

After the first of three strikeouts in the frame, Wisdom jumped on a 97 mph fastball and launched a 107.4 mph shot to deep left for a 2-0 lead.

The Rays got to Hendricks in the fourth when Lowe recorded their first hit, stole second and came around on Ji-Man Choi’s single to right. But Hendricks got a flyout and strikeout to end it.

Suzuki knocked a single in the fourth to tie Pafko’s mark. However, he was called out at second on Randy Arozarena’s throw from left field, a decision the Cubs challenged but which was upheld.

In the fifth, Lowe leveled it 2-2 on an RBI single to chase Hendricks.