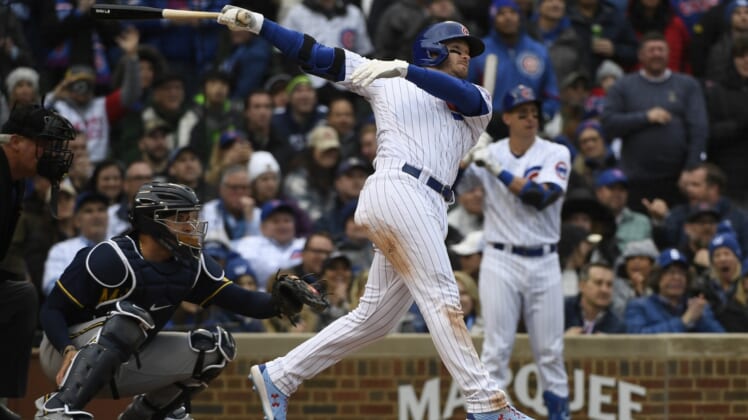 Ian Happ finished with three hits Thursday afternoon, including the tie-breaking, two-run double in the seventh inning that sparked the host Chicago Cubs to a 5-4 win over the Milwaukee Brewers in the first game of the Major League Baseball season.

The Cubs, whose streak of six straight winning seasons ended when they went 71-91 in 2021, improved to 80-65-2 all-time on Opening Day. The Brewers, who have made a franchise-record four consecutive playoff appearances, fell to 28-25-1 on Opening Day.

The Cubs took a 3-1 lead in the fifth on a sacrifice fly by Patrick Wisdom and a two-run home run by Nico Hoerner before the Brewers tied the score in the top of the seventh against Chris Martin (1-0), who surrendered Willy Adames’ RBI double and Christian Yelich’s sacrifice fly.

The Cubs wasted little time building the winning rally against Aaron Ashby (0-1) and Jake Cousins. Clint Frazier, pinch-hitting for Rafael Ortega, delivered a one-out double and went to third on a groundout by Nick Madrigal. Cousins entered and plunked Willson Contreras before Happ scored both runners by doubling to deep centerfield on a 3-2 pitch.

The Brewers cut the gap in half against Rowan Wick in the eighth, when Rowdy Tellez led off with a single, went to third on a one-out double by Victor Caratini and scored on Lorenzo Cain’s sacrifice fly.

Mychal Givens entered and struck out Mike Brosseau before David Robertson earned the save by working around a hit in the ninth.

Jason Heyward had two hits while Seiya Suzuki, making his MLB debut after nine seasons as a star in his native Japan, went 1-for-2 with two walks.

Cain also had an RBI groundout in the first for the Brewers. Adames, Tellez and Andrew McCutchen all had two hits each.