“I got to do it next year,” says Heat’s Jimmy Butler

Butler notched triple-doubles in Games two and five to force the sixth game and led the Heat in points, rebounds, assists, blocks and steals during the Finals. 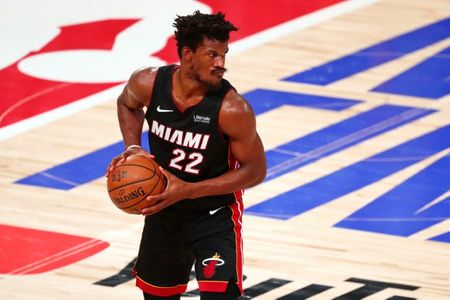 (Reuters) – Jimmy Butler felt sorry for being unable to lead the Miami Heat to an NBA title after losing to the Los Angeles Lakers, but he said he was now more motivated to fulfil his promise of winning the championship with the franchise next year.

In his debut season with the team, the 31-year-old Butler elevated his game as the Heat stormed to the Finals for the first time since 2014, only to lose the best-of-seven title series 4-2 on Sunday.

The Lakers captured a record-tying 17th NBA Championship with a 106-93 victory in Game 6, with Finals MVP and former Heat player LeBron James leading the charge.

“This is what my team needed me to do, the organization asked of me,” Butler told reporters. “I told them that I would win them one and I didn’t hold up my end of the bargain, so that means I got to do it next year.

“I told (president) Pat (Riley), I told coach Spo (Erik Spoelstra) I’m here to win one. I didn’t do my job, so moving forward, I got to hold up my end of the bargain.”

Butler notched triple-doubles in Games two and five to force the sixth game and led the Heat in points, rebounds, assists, blocks and steals during the Finals.

He brushed his own performances aside, however.

“I’ll be better, along with everybody else. I’ll be better coming back. You sulk on this because of what could have been, but it didn’t happen. We didn’t win and that’s what you leave this at.”

(Reporting by Rohith Nair in Bengaluru, editing by Ed Osmond)