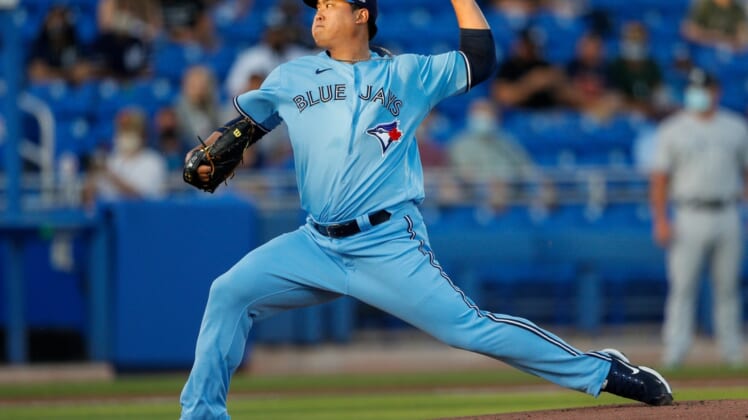 The win was the second in seven games for the Blue Jays, who have split the first two games of the three-game series with the Yankees.

New York has lost four of its last six.

The Blue Jays supported Ryu (1-1) by scoring in every inning between the second and fifth. The 34-year-old left-hander allowed just one unearned run on four hits and one walk while striking out seven over 6 2/3 innings. He recorded 13 outs in a row over 12 batters following a leadoff single by DJ LeMahieu and faced the minimum until ninth-place hitter Jay Bruce doubled with two outs in the sixth.

Josh Palacios delivered a two-run single off Jameson Taillon (0-1) in the second and Randal Grichuk lofted a sacrifice fly in the third before the Blue Jays chased Taillon in the fourth. With two outs, Semien homered and Bo Bichette doubled and scored on a double by Vladimir Guerrero Jr.

Tellez hit his first homer of the year in the fifth and Bichette added a sacrifice fly in the eighth. Bichette, Guerrero and Cavan Biggio all had two hits apiece.

The Yankees broke through in the seventh, when Gary Sanchez reached on a one-out error by Biggio, took third on Aaron Hicks’ double and scored on a groundout by Rougned Odor, the last batter to face Ryu.

The Yankees threatened in the eighth, when Clint Frazier delivered a leadoff single that glanced off pitcher David Phelps, who was forced to exit. LeMahieu doubled with one out and Giancarlo Stanton followed with a two-run single. With two outs, Sanchez drew a walk but was caught in a rundown between first and second after Julian Merryweather’s pitch skipped away from catcher Danny Jansen.

Hicks had three hits for the Yankees.

Taillon allowed five runs on eight hits and one walk while striking out three over 3 2/3 innings.