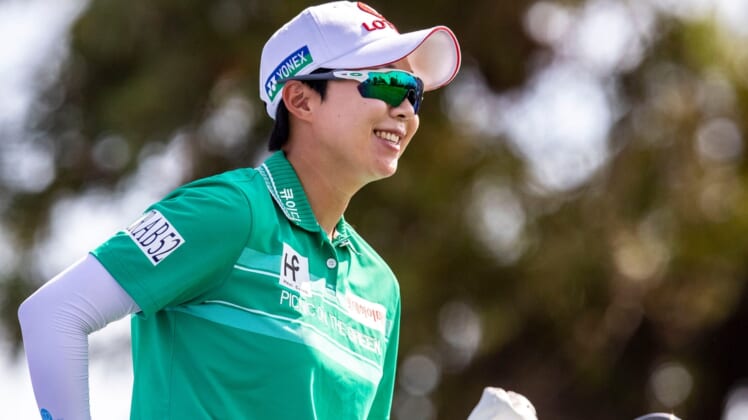 Hyo Joo Kim endured an up-and-down third round on Friday but still maintained her three-shot lead at the Lotte Championship in Ewa Beach, Hawaii.

The 26-year-old South Korean shot an even-par 72 at Hoakalei Country Club to sit at 10-under 206 heading into the final round.

The United States’ Brianna Do and Japan’s Hinako Shibuno are tied for second at 7 under. Do carded a 5-under 67 on Friday, matching the best score of the day, while Shibuno posted a 4-under 68.

South Korea’s Somi Lee and Northern Ireland’s Stephanie Meadows each shot a third-round 69 to share fourth place at 6 under.

Kim had 11 pars and two bogeys among her first 13 holes on Friday, but birdies on the par-4 14th hole and the par-5 18th allowed her to pull back to par for the round.

Do, a 32-year-old veteran who has never made the top 10 of an LPGA Tour event, birdied her first three holes and finished with six birdies and one bogey.

Conversely, Shibuno got off to a slow start, making par on each hole of the front nine. She then birdied Nos. 10, 11, 14 and 17 to cap a bogey-free round.

Defending champion Lydia Ko of New Zealand is tied for 33rd — just as she was following the second round — after a 73 left her at 1 over.

The 10th edition of the event is being played at Hoakalei Country Club for the first time. It was held at Kapolei Golf Club last year following eight years at Ko Olina Golf Club.