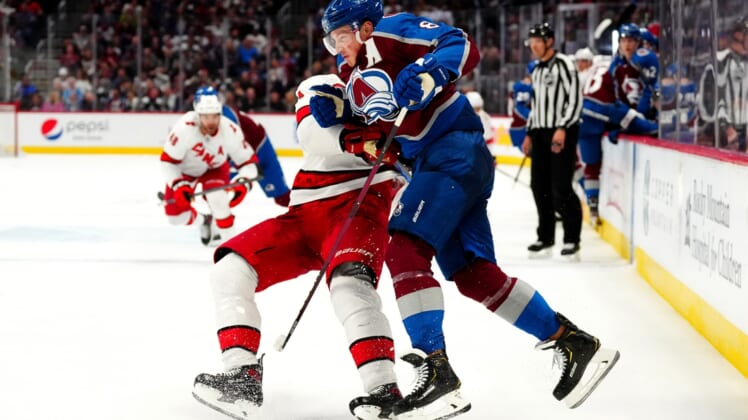 Losing a game and potentially falling out of first place in their division might be the least of the concerns for the Carolina Hurricanes.

They’ll go into Monday night’s game against the Arizona Coyotes at Glendale, Ariz., with other questions to address after a couple of injuries to key players.

Staal left with about 10 minutes remaining after a big hit from Cale Makar. Andersen was dealing with some sort of lower-body injury when he was assisted off the ice several minutes later.

“It’s never fun to watch your own teammate go down,” Hurricanes center Sebastian Aho said. “We have a little adversity right now. We’ll see what (we are) right now. These are the moments the team has to come together and come back even stronger.”

It almost guarantees that Carolina goalie Antti Raanta will be in the crease at Arizona (22-48-5, 49 points), where he played for four seasons before joining the Hurricanes in the offseason.

Carolina shares first place in the Metropolitan Division with the New York Rangers. Their chances of catching the Florida Panthers (114 points) for the top overall spot in the Eastern Conference appear to be dimming — especially if the types of sequences that took place in the Colorado game resurface.

Carolina’s power play had promising moments, but Brind’Amour described the team’s penalty killing as “no good.” Penalty killing had been a strength for the Hurricanes across the first few months of the season.

“I don’t know if it was a total gong show for us, but we gave up too much early,” Brind’Amour said.

The Coyotes had even worse defensive problems Saturday in a 9-1 loss to the Calgary Flames for their sixth straight loss despite leading 1-0 through the first period. They’ve allowed at least five goals in each of those setbacks and their only victory this month came in overtime.

“Right now we’re beating ourselves up mentally and we’re having a tough time getting out of those slumps,” Arizona coach Andre Tourigny said.

“That’s really tough mentally,” Tourigny said. “That’s something we need to address and be better.”

Arizona lost defenseman J.J. Moser to a lower-body injury during the Calgary game. With Carolina coming in, the Coyotes will face one of the top eight teams in terms of points for the second straight game.

Arizona is beginning a four-game homestand across six nights.

The Hurricanes are just 3-5-0 this month. Staal has been one of the team’s most productive players recently, posting a total of six goals in the past four games.

Carolina won the first meeting with Arizona by 2-1 on Halloween.