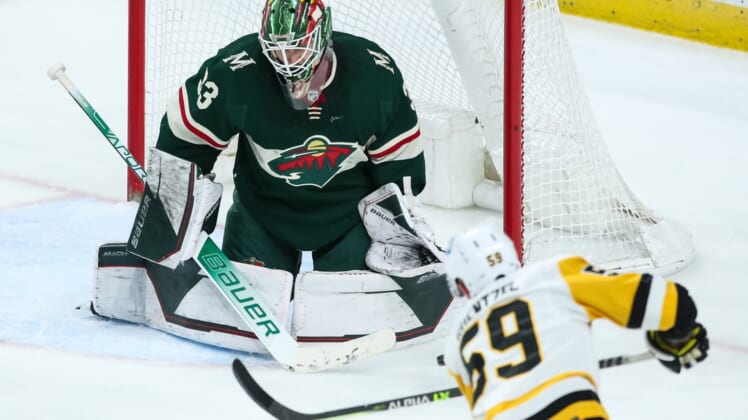 The Carolina Hurricanes have been back in a groove, but their six-game points streak might look routine compared to the surging Minnesota Wild.

The teams collide Saturday night at Raleigh, N.C., where confidence should be strong for both sides.

The Wild (41-20-5, 87 points) will begin a four-game road trip after a seven-game winning streak ended with Thursday night’s 4-3 overtime loss to the Pittsburgh Penguins.

“Going into this road trip we’re playing some of the best teams in this league and you’re going to have it every single night,” Wild goalie Cam Talbot said. “They’re going to be hard, heavy games. We’re built for that, but they’re going to be tough.”

The Hurricanes (45-15-8, 98 points) have been racking up goals again. They’ve averaged five goals across their last four games.

“Everyone is buying in. That’s huge,” Carolina goalie Frederik Andersen said. “Everyone is out there with a purpose.”

The Hurricanes are becoming even stronger with its lineup further in place. Winger Max Domi has played five games since arriving in a trade with the Columbus Blue Jackets. Then forward Jordan Martinook returned from a seven-game absence with a lower-body injury to play Thursday night.

“And then he has a big game,” coach Rod Brind’Amour said of the impact Martinook made, drawing a Montreal penalty in the opening minutes that led to a power-play goal to open the scoring.

“He brings an energy,” forward Sebastian Aho said of Martinook.

Aho has a goal in each of the last three games. He scored eight goals in March to push his team-leading total to 31.

“I hope I have a lot of goals still in me and keep going,” Aho said.

Winger Andrei Svechnikov scored two goals Thursday night for the Hurricanes, with his empty-net tally pushing his career points total to 200. He achieved that in 270 games.

Carolina made two trips to Minnesota this season, the first time with the game postponed in December amid COVID-19 concerns. Then the Wild won 3-2 on Feb. 12 when the teams met for the make-up game.

While Minnesota has racked up wins on their late-March homestand, there has been a toll with injuries starting to pile up. That might come with a certain style of play.

“If anything, we’re the ones that grind other teams down and make it tough on them,” Talbot said.

Minnesota defenseman Jon Merrill exited the Pittsburgh game with an upper-body injury and won’t be on the trip to Carolina.

Coach Dean Evason said the Wild will maintain the approach that has worked well.

“We played that way all year so we can continue to play that way going forward,” Evason said. “Our guys know how to play.”

The Hurricanes are one of four teams this season to reach the 25-win mark in home games. Carolina has racked up more than 40 shots on goal in each of its last four home games.

“It just starts tiring the other team out,” Hurricanes defenseman Tony DeAngelo said. “It’s a lot of volume. That’s our identity.”