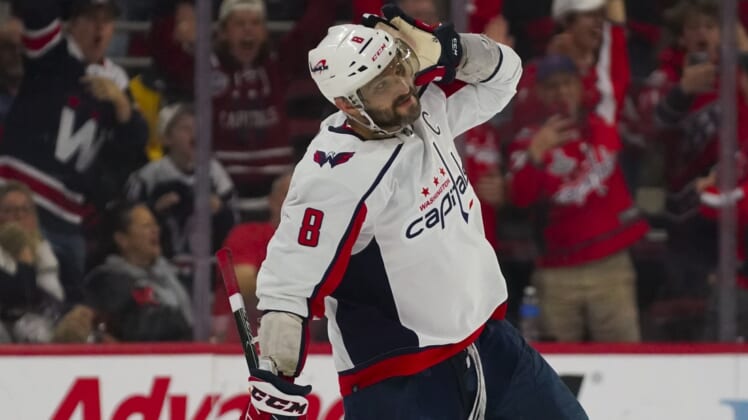 The Carolina Hurricanes have accumulated the third-most points in the NHL, however only one has come at the expense of the Washington Capitals.

The Metropolitan Division-leading Hurricanes have lost all three meetings (0-2-1) to the Capitals heading into the teams’ series finale on Monday night in Washington, D.C.

Carolina answered a four-game skid (0-3-1) by recording five of six points over its last three contests, highlighted by a 7-2 romp over the St. Louis Blues on Saturday.

“It wasn’t one of our better games,” Brind’Amour said. “It’s just that everything we shot went in. It’s just the law of averages. Clearly (Saturday) was that. I don’t know that we played great. Two periods we were fine. In the third period, naturally you lead by three and you have a tendency to lay back.”

Andrei Svechnikov celebrated his 22nd birthday by scoring twice for Carolina. He had scored just one goal and set up seven others in his previous 16 games, with a total of one assist in two encounters against the Capitals in that stretch.

To be fair to Svechnikov, the rest of his teammates were shut out by Vitek Vanecek as well during the Washington goalie’s 36-save performance on March 3. The Capitals coupled that 4-0 win with a 4-3 shootout victory over the Hurricanes on March 18 as part of their current 9-2-1 run.

“We talked about the month of March,” Washington coach Peter Laviolette said after his team’s 4-3 win over the New Jersey Devils on Saturday. “There was obviously a couple of months, January and February, weren’t up to anybody’s standards. … Month of March, sometimes you can just clear the deck, turn the page on a month and start a fresh month, and we did and it’s going in the right direction.”

Superstar captain Alex Ovechkin scored his team-leading 42nd goal, with 10 of them coming in March. The three-time Hart Trophy recipient has tormented Carolina this season by scoring a goal in all three meetings. He even netted the winning tally in the shootout against the Hurricanes on March 18.

Evgeny Kuznetsov extended his point streak to 12 games (seven goals, eight assists) on Saturday after setting up Ovechkin’s eventual game-winning goal. Kuznetsov has scored a goal in each of the last two encounters with Carolina.

Nicklas Backstrom, who was honored before Saturday’s game for reaching 1,000 NHL points, scored the go-ahead goal at 6:56 of the third period. Fans showed their appreciation by tossing red Nerf apples on the ice, with the gifts given out earlier to commemorate Backstrom’s milestone.

“I was like, this is amazing. I mean, I didn’t score a hat trick, but it was fun that the crowd did it,” Backstrom said. “It was hilarious, I think. And then all the players just keep shoveling. They needed some help. It was just an awesome experience.”