Hurricanes squeeze past Capitals in shootout 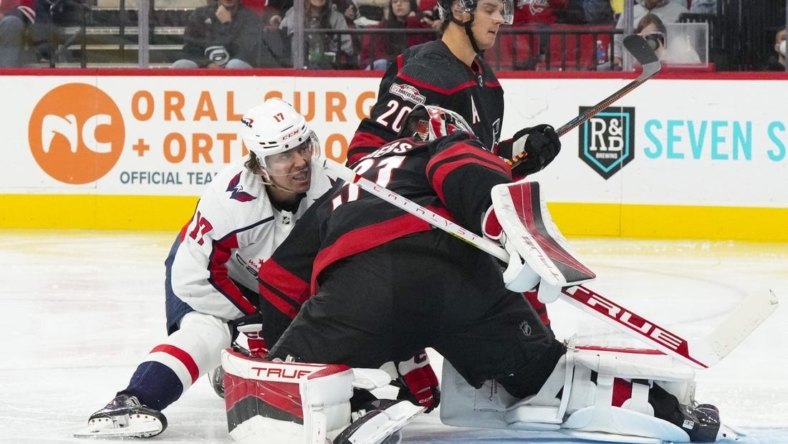 Andrei Svechnikov scored the decisive goal in a shootout as the Carolina Hurricanes beat the Washington Capitals 3-2 on Monday night in Raleigh, N.C.

Stefan Noesen and Svechnikov scored in regulation for the Hurricanes, and Martin Necas had two assists. Carolina goalie Frederik Andersen made 18 saves before stopping the last two Washington attempts in the shootout.

Dylan Strome and Alex Ovechkin had goals for the Capitals. Goalie Darcy Kuemper collected 33 saves through regulation and overtime but just one in the shootout.

It was the first shootout this season for both teams. Carolina’s Brent Burns and Washington’s Evgeny Kuznetsov began the tiebreaking competition by converting before Svechnikov had the only other tally in the second round.

The Hurricanes had a power play for the final 1:55 of regulation because of Marcus Johansson’s tripping penalty but failed to convert. They also had a two-minute advantage in overtime after Lars Eller’s tripping penalty.

Washington ended up in overtime for the first time this season. The Capitals finished with a season-low 20 shots despite the extra five minutes.

Ovechkin, who has made a habit of troubling the Hurricanes, buried a power-play shot from the left side of the net for a 2-1 lead approaching the midway mark of the second period. He has 47 career goals in 86 games against Carolina.

Svechnikov posted his team-high eighth goal with 4:18 to play in the second period to tie the game at 2-2.

Both teams were buzzing at times during a four-on-four stretch in the third period. Another four-on-four setup for two minutes later in the period wasn’t nearly as entertaining.

Noesen tipped in Burns’ shot on a power play 4:27 into the game for the first goal. It was Noesen’s first goal in 10 games with the Hurricanes over parts of two seasons.

The Capitals were without right winger T.J. Oshie and defenseman John Carlson. Both players went out with lower-body injuries Saturday night at Nashville. While Carlson is day-to-day, Oshie is sidelined indefinitely. Among the lineup adjustments, defenseman Matt Irwin made his season debut.

Carolina secured its first home win since the Oct. 12 opener against the Columbus Blue Jackets, though the Hurricanes were in just their third home game overall.