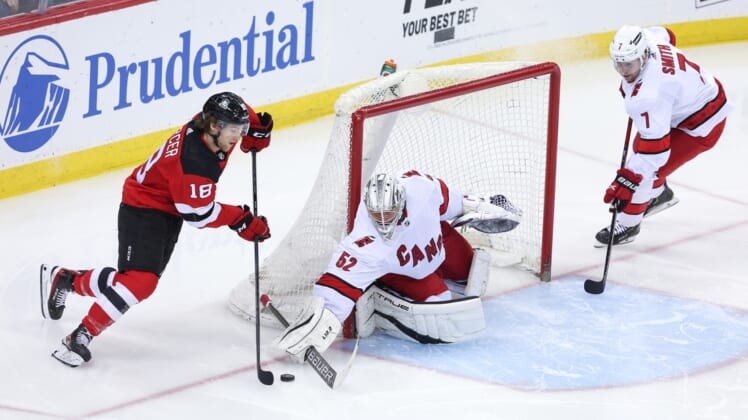 Seth Jarvis scored at 1:39 of overtime to complete a huge rally for the Carolina Hurricanes in a 3-2 victory against the New Jersey Devils on Saturday afternoon at Newark, N.J.

Brady Skjei and Nino Niederreiter scored in the last 5:36 of regulation as Carolina (51-20-8, 110 points) produced a third-period uprising for the second game in a row. Niederreiter’s tally came with 1:56 left after the Hurricanes went with an extra skater.

Yegor Sharangovich had a goal and an assist as the Devils appeared ready to deal a blow to Carolina’s hopes for a divisional title. Nico Hischier also scored for New Jersey.

The Hurricanes, who now have three games remaining, entered the day tied with the New York Rangers atop the Metropolitan Division. New York plays later in the day at Boston.

It was a game with a low shot total. The team combined for 29 shots (18 by Carolina, 11 by New Jersey) through two periods.

Sharangovich opened the scoring with 4:17 to play in the second period on a power play. That ended New Jersey’s 0-for-31 stretch on power plays, giving them a goal with a man advantage for the first time in 12 games.

It was Sharangovich’s 23rd goal of the season

Hischier notched his 21st goal with 11:30 remaining in the third period.

Skjei put the Hurricanes on the board with an unassisted goal with 4:36 to play.

Two nights earlier against Winnipeg, the Hurricanes didn’t score until the final minute of the second period on what became a 4-2 comeback victory. Jarvis notched the game-winning goal in that outcome as well.

Carolina avenged a loss from a January visit to New Jersey.