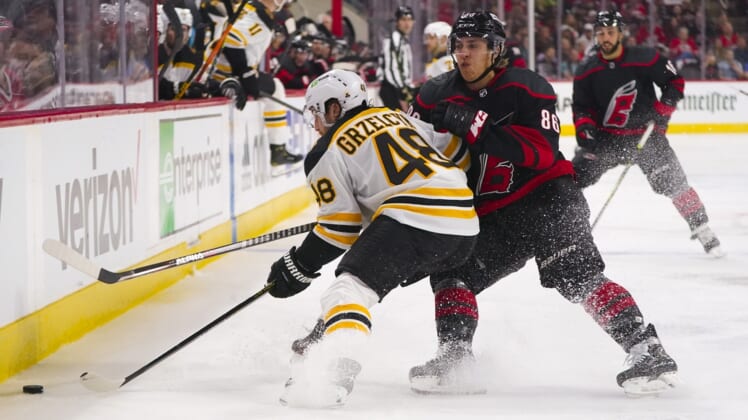 Regardless of where the games take place, the Carolina Hurricanes have delivered dominating efforts against the Boston Bruins all season.

Entering Friday night’s Game 3 of an Eastern Conference first-round series, Carolina has won all five regular-season and playoff meetings between the teams by a combined 26-4 score.

The Hurricanes took command of the series with a 2-0 lead after Wednesday’s 5-2 win in which they had three 5-on-3 advantages and scored two power-play goals.

“There was not a dull moment, that’s for sure,” Carolina coach Rod Brind’Amour said. “A bit of everything in that game. … Like I’ve said all year, whatever way the game goes, I think we’re pretty capable of playing it. If it’s physical, we have guys that can do that. If it’s a skill game, I think we’re capable of doing that too.”

The Bruins will look to change the tone of the series on home ice, although they haven’t been able to match Carolina’s unrelenting speed and lost composure during the most recent setback.

“They’re going to make you pay,” Bruins captain Patrice Bergeron said. “You want to play physical and hard, but you want to make sure it’s the right way. … They scored some goals on the power play and it hurt us.”

Sebastian Aho and Nino Niederreiter each scored twice in Game 2 for the Hurricanes, including once each on the power play. 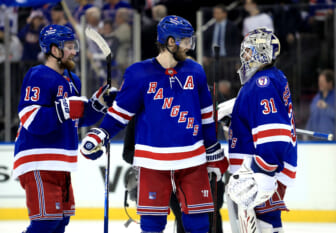 History is on the Hurricanes’ side. Teams that take a 2-0 lead in a best-of-seven series hold an all-time series record of 337-52. Carolina has won five of the previous six series in which it led 2-0.

The physicality of Game 2 led to key players on both sides leaving with injuries.

Raanta was bloodied and immediately exited, although he didn’t enter concussion protocol and was “in good spirits” after the game. He was on the ice at practice Thursday, but his game status hadn’t yet been determined.

Bruins coach Bruce Cassidy said that defenseman Hampus Lindholm was “not doing well” after taking a hard hit along the boards from Hurricanes forward Andrei Svechnikov in the second period. He won’t play in Game 3.

“(The hit) was on time, certainly. It looked high, but (the referees) didn’t see it that way,” Cassidy said.

“You never want to see guys get hurt,” said Brind’Amour, who saw the two major physical plays differently than Cassidy. “I don’t like seeing our goalie get taken out either, but one was legal (and) one was not, if you really want to break it down.”

“There’s a lot of faith in our group with that goalie,” Brind’Amour said of Kochetkov, who won all three regular-season games in which he played.

Cassidy was encouraged by some of his team’s progress.

“We needed a timely save (from Linus Ullmark), there’s no doubt,” he said. “… We scored a couple. I thought (Kochetkov) did a real good job. We could have had more than two. … There’s not a lot of structure on either side that’s leading to defined advantages in play. Their special teams were big. … We were in the box a lot.”

Jeremy Swayman will make his first start of these playoffs in Boston’s net.

After the Hurricanes responded to the many physical challenges in Game 2, they sound prepared for more as the series continues.

“We’re not going to get pushed around, I can guarantee you that,” Carolina defenseman Tony DeAngelo said after a three-assist game.