Hurricanes primed to put away series on road vs. Bruins 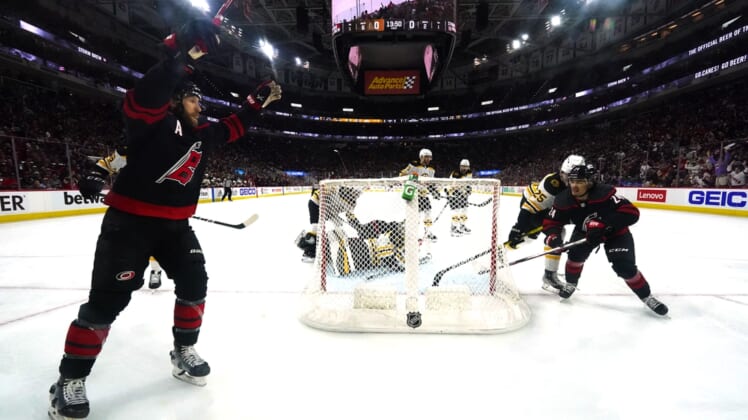 The Carolina Hurricanes are on the cusp of advancing past the Boston Bruins in their first-round series after cruising to a 5-1 home win in Game 5 on Tuesday.

The Hurricanes have a 3-2 series lead heading into Game 6 on Thursday.

“When we score a goal, I get excited, I wish I was playing. You can’t beat the feeling when we pump one in and the crowd goes crazy,” Carolina coach Rod Brind’Amour said of the electric home atmosphere. “It’s very special.”

If Carolina wants to leave nothing to chance in a winner-take-all Game 7 back in Raleigh, N.C., it will have to pull a win out of Boston for the first time in the series.

Entering Game 6 at Boston, the home team has won the first five games.

“Most teams feed off their home crowd, especially at playoff time,” Bruins coach Bruce Cassidy said. “(Carolina is) still a younger group so sometimes that affects you even more. I think they’re good no matter where they play.

“They came into our building earlier this year and showed that. … We did the same thing in Boston. We feed off our crowd a lot.”

Carolina is coming off of a complete effort Tuesday, building a 3-0 lead and adding a pair of third-period goals. That leaves Brind’Amour feeling confident heading back to the road.

“It’s a pretty solid game,” Brind’Amour said. “… At this time of the year, you have no chance if you don’t have 20 guys dialed in because every shift and every aspect of the game can be the difference. Everyone was good.”

Carolina was 2-for-5 on the power play, doubling its goal total with an extra man from the first four games.

“All four lines, all 60 minutes, and (Antti) Raanta was fantastic too,” DeAngelo said. “Whoever wins the special-teams battle is going to win the game and that’s the way it’s going.”

Cassidy thought his team started well in Raleigh. While defenseman Charlie McAvoy (COVID protocol) returned after missing Game 4, the Bruins will need more from some key players in order to produce back-to-back wins.

David Pastrnak hasn’t been on the scoresheet in any of the three road games in the series, while Erik Haula has been held without a goal through all five games.

“I thought we were the better team for the first six or seven minutes, then (Jaccob Slavin’s first-period goal) went in and gave them a lot of juice,” Cassidy said.

“That part was good, but not enough up and down our lineup. … We need to find a way to get some guys going. That’s on me, but it’s also the time of the year where that inner drive comes through.”

After the Canes dominated the regular-season series, the Bruins knew their opponent would be ready to play again. Now, it’s do-or-die.

“We know they’re going to push. They’re a good team. You can see they’re very hungry right now,” Boston’s Brad Marchand said. “But we just have to give it everything we have (on Thursday) and hope there’s a tomorrow.”