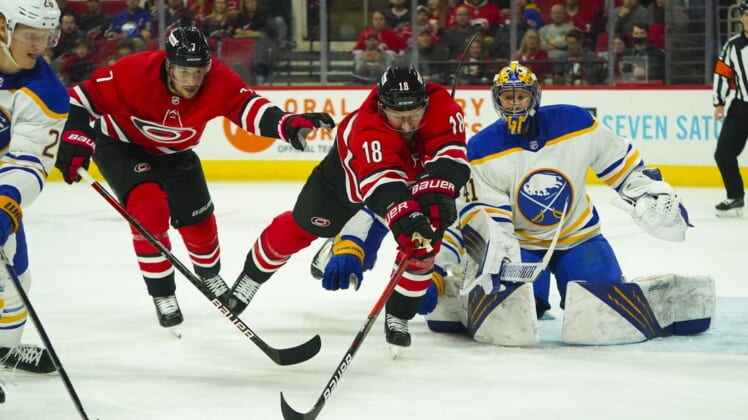 Sebastian Aho broke a third-period tie with his second goal of the game, and the Carolina Hurricanes clinched a spot in the Stanley Cup playoffs with a 5-3 comeback win against the visiting Buffalo Sabres on Thursday.

Aho put Carolina in front 4-3 when he stopped a pass with his skate before scoring on a backhander from the slot at 11:39 of the final frame.

Jordan Staal scored twice, Teuvo Teravainen added a goal and Seth Jarvis and Andrei Svechnikov had two assists apiece for the Hurricanes (46-17-8, 100 points), who won for the first time in three games. Antti Raanta made 18 saves for the victory.

Tage Thompson and Alex Tuch each had a goal and an assist, Victor Olofsson scored and Jeff Skinner had two assists for the Sabres (26-35-11, 63 points). Craig Anderson made 27 saves as Buffalo slipped to 8-3-3 in its past 14 games.

Thompson gave the Sabres a 1-0 lead at 3:49 of the first period. Skinner, along the right wall, sent a no-look backhand pass to a streaking Thompson in the right circle for his 32nd of the season.

Tuch doubled the advantage at 6:25 of the first. Skinner got his stick on a bouncing Thompson pass in the left circle and skated below the goal line before dishing off to Tuch in front of the net.

Aho got the Hurricanes on the board at 4:59 of the second period. Jarvis intercepted Rasmus Dahlin’s clearing pass attempt in the neutral zone and sent it over to Svechnikov, who quickly fed Aho in the left circle to cut the deficit to 2-1.

The Sabres responded 30 seconds later. Casey Mittelstadt won a battle along the wall and sent a pass to Olofsson, who skated untouched from the left circle to the front of the net before sliding a backhand five-hole on Raanta to make it 3-1.

Carolina capitalized on another Buffalo turnover to narrow it to 3-2 at 16:32 of the second, when Teravainen intercepted Cody Eakin’s clearing attempt in the slot.

Staal tied it 3-3 from the slot at 5:12 of the third period and added an empty-net goal with 55 seconds remaining for the 5-3 final.