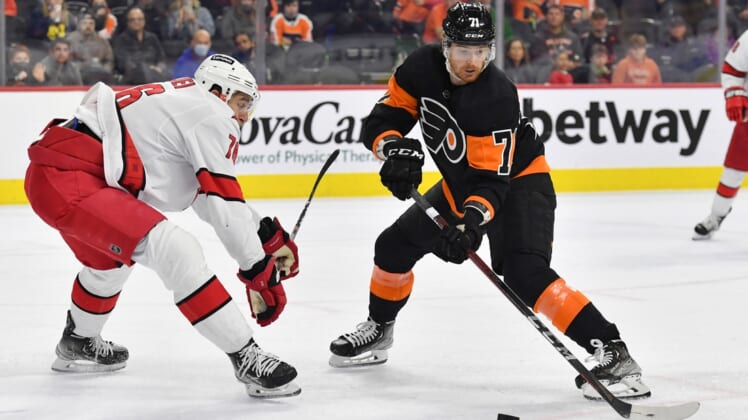 The Carolina Hurricanes just played the team with the most points in the NHL. Next, they face a team with among the fewest in the league.

Keeping the intensity will be among the priorities for the Hurricanes when they meet the Philadelphia Flyers on Saturday afternoon in Raleigh, N.C.

“You could tell there were two teams going at it that were two good quality teams,” Hurricanes coach Rod Brind’Amour said after his team’s 2-0 home victory against the Colorado Avalanche.

Now, Carolina owns the most points per game in the NHL through Thursday night’s games. The Hurricanes have more than twice as many victories (40 to 18) as the Flyers.

Yet putting the impressive effort against the Avalanche behind them could be one of the keys for the Hurricanes for Saturday’s game.

“I’m not sure what kind of statement it makes,” Brind’Amour said. “Because haven’t played (the Avalanche) in forever, just kind of see where you kind of stack up. … We’ll be talking about Philadelphia because that’s our next game and this one will be forgotten.”

Carolina’s 12-game home-ice points streak is tied for the second-longest stretch in franchise history, a feat last accomplished in 2009.

So even more good vibes should be circulating among the Hurricanes.

“That’s a game we pride ourselves playing,” defenseman Ethan Bear said of the fast-paced clash with Colorado.

Goalie Antti Raanta has made three straight starts for the Hurricanes as Frederik Andersen works through what has been described as a minor ailment. Raanta’s 36-save effort Thursday night resulted in Colorado being shut out for the first time this season.

“It gives us that confidence to just play our game,” Bear said. “At the same time, we’re going to play hard for whoever is in net.”

Andersen, who entered March with the NHL’s top win total, has been working in recent practices, but the depth at the goalie position should be a plus.

“I think we all felt (Raanta) had that kind of game we saw (Thursday) in him,” Brind’Amour said.

Philadelphia is looking for any sort of consistency.

The Flyers are 2-3-0 this month and coming off Thursday night’s 6-3 loss at Florida. There was a spark after falling into a 4-0 hole, with Philly scoring the next three goals.

So maybe there was some momentum to take from that outing.

“I know it’s not the result we want, but we just have to carry that into the next game,” Flyers goalie Carter Hart said.

So now Philadelphia has a second road game in a row against a top-flight team in the Eastern Conference.

Concern for the Flyers revolves, in part, around the condition of forward Scott Laughton, who left the game in Florida with a head injury. He’s fourth on the team with 28 points (11 goals, 17 assists).

“A real tough one,” Yeo said of the injury. “He’s an emotional leader for our group. He has been playing at such a high level for us, so it was tough to see.”

Carolina center Seth Jarvis played slightly more than six minutes Thursday night because he was dinged up, so that could mean that Derek Stepan moves back into the lineup this weekend.

This is the final of four meetings between the two teams this season. The Flyers won 2-1 on Nov. 12 in Raleigh. Carolina beat host Philadelphia 6-3 on Nov. 26 and again 4-3 in overtime on Feb. 21.