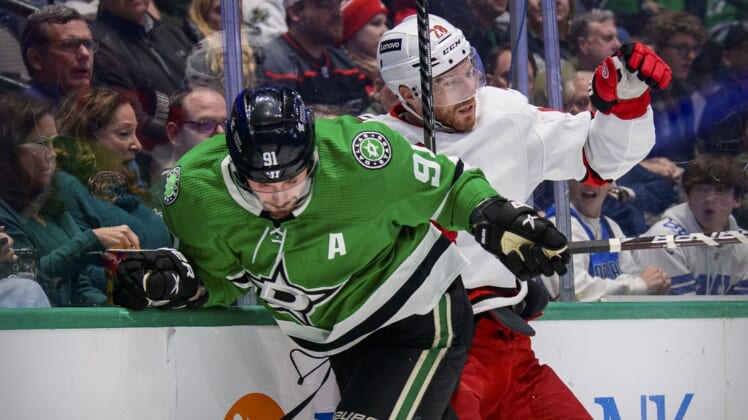 The Dallas Stars want to be a major factor in the final weeks of the season. Getting to that point on the schedule still with a chance will be the key to that.

“Twenty games to go,” Stars coach Rick Bowness said. “We just have to hang in there to keep battling for the eighth or seventh spot until the end of this month.”

The Stars take on one of the NHL’s top teams with a matchup against the Carolina Hurricanes on Thursday night in Raleigh, N.C.

Bowness said this is a critical stretch because the Stars will have the potential boost of playing 10 of their last 14 games at home if they can navigate another week of the schedule.

Carolina is coming off a rough patch, but it might not be as bad as it looks. Coach Rod Brind’Amour said the Hurricanes have played strong games in four of their last five outings.

Dallas has won three of its last four games, including a 5-3 decision against the Edmonton Oilers on Tuesday night. That result became just the first time in 22 games this season that the Oilers scored first and didn’t win.

Part of the Stars’ success this season includes some solid road outings. They’re 14-16-2 away from home, including 4-3-0 so far this month.

“This group will learn to play through situations,” Bowness said of potential glitches.

Forward Tyler Seguin said good things are still in the works for the Stars.

“We’ve been saying from Day One that our team, on paper, is really good,” Seguin said. “Paper doesn’t mean anything so it’s about putting it all together at the right time. We have a lot of vets on this team and we know what that means. … It’s the push and it’s getting ready to try to get into that dance.”

The Hurricanes should have newly acquired forward Max Domi in the lineup Thursday night. He was added via a trade Monday with the Columbus Blue Jackets.

“At this point in your career, when you’ve been around you know most of the guys,” Domi said. “I’m super-excited to be here. … The whole entire team is kind of one. They all do the same thing. They buzz every shift. To just kind of jump on board is a neat opportunity.”

Scoring has been a bit of an issue for Carolina lately, particularly in the first periods when the Hurricanes have often dominated play but haven’t had anything to show for it.

“Adding a good player like (Domi), a great guy, will be real good for our group,” Hurricanes defenseman Tony DeAngelo said. “He has big-time speed. He can shoot it. He makes a lot of plays. He’s feisty. He’s tough. It just gives us more.”

The Stars and Hurricanes met frequently last season when they were in the same division, but this will be the second and final matchup of this season. Dallas won 4-1 in late November in a result that was part of Carolina’s three-game skid — its longest losing streak until this month.

This will wrap up a four-game homestand for the Hurricanes. They’ve notched at least one point in 15 of their last 16 games on home ice.