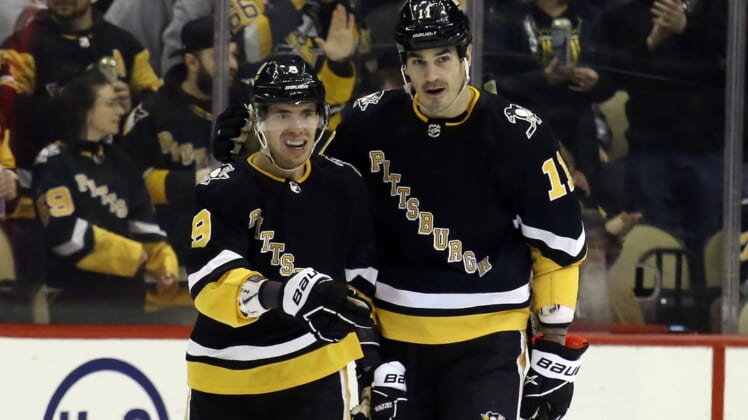 The Carolina Hurricanes will try for a season sweep and a chance to further solidify their hold on first place in the Metropolitan Division when they visit the Pittsburgh Penguins on Sunday afternoon.

Carolina will go for its second win in as many days after a 3-1 home victory Saturday against the Philadelphia Flyers, who sit last in the Metropolitan. That win tied Carolina with the Colorado Avalanche for most points in the NHL standings. The Hurricanes’ .750 points percentage is the best in the league. They have won four straight and are 9-1-1 in their past 11 games.

“Everybody is buying in for the bigger goal here,” forward Jordan Martinook, who scored the go-ahead goal in the third period against the Flyers, told ABC. “We want to keep this thing rolling.”

That 11-game stretch includes a 4-3 win in Pittsburgh on Feb. 20 and a 3-2 overtime victory against the Penguins at home on March 4.

Carolina and Pittsburgh, which sits eight points behind the Hurricanes in the division, play only three times this season. Carolina has a game in hand on the Penguins.

“The game is important, but not only for the points in the standings,” Penguins defenseman Kris Letang said. “We want to battle that team because they’re the top team and they’re a good measuring stick for us.”

Pittsburgh might have gleaned more about itself than the Hurricanes in the two losses. They gave up two third-period goals in the 4-3 road loss and blew a 2-0 lead at home.

“I don’t think there’s anything earth-shattering that we’ve learned (about Carolina),” Penguins forward Zach Aston-Reese said. “I think at this point it’s beyond Xs and Os and it just comes down to ‘compete’ and ‘will’ and all those words you can use.

“I know a lot of guys are (angry) about the results we’ve had against them.”

That doesn’t mean the Penguins don’t respect the Hurricanes’ talent.

“They’re mobile. They’re mobile at the forward position. They’re very mobile at the defense position. And they play an in-your-face game. It’s as hard a man-on-man team that I think is in the league. They’re going to make us work for every inch out there. We’ve got to do everything in our power to make it just as hard on them.”

The Penguins will be without forward Brock McGinn, who left a 5-2 win over the Vegas Golden Knights on Friday with what is believed to be a hand or wrist injury. The Penguins list him as week to week.

Based on practice Saturday, it would appear that Kasperi Kapanen will take his place. Kapanen, who has struggled for much of the season, was a healthy scratch Friday for the first time this season.

Pittsburgh defenseman Brian Dumoulin, who missed the win against Vegas because of a non-COVID-19 illness, practiced Saturday and would appear to be ready to return Sunday. However, Dumoulin, long a fixture on the top pairing with Letang, could lose that spot to Mike Matheson, who filled that role Friday and scored a goal.