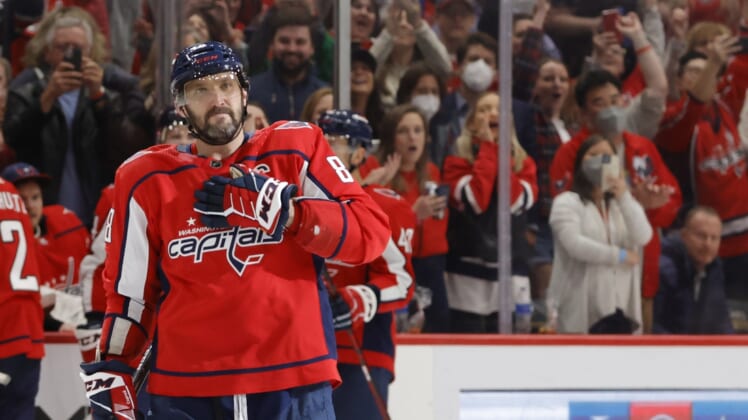 Frequently this season, the Carolina Hurricanes have entered matchups looking like the team on the bigger roll.

Not now. It’s the Washington Capitals.

The teams meet Friday night in Raleigh, N.C., with the Capitals riding a seven-game point streak. Washington is 6-0-1 this month, beginning with a 4-0 blanking of the Hurricanes on March 3.

The Capitals matched their highest goal total of the season on Thursday in a 7-2 rout of the host Columbus Blue Jackets, boosted by Anthony Mantha’s two goals in the first 12 1/2 minutes.

“It’s way better than playing from behind,” Capitals coach Peter Laviolette said. “It’s nice to play with a lead.”

Alex Ovechkin also scored for the Capitals, giving him 38 goals this season. He needs two more to tie Wayne Gretzky for the most 40-goal seasons in NHL history. Gretzky did it 12 times.

The Hurricanes have lost back-to-back games, and now they have little time to recover. They had three days off before taking a 3-2 road loss against the Toronto Maple Leafs on Thursday. That was Carolina’s first outing of three games across four nights.

“We can’t get down on ourselves,” Hurricanes defenseman Ethan Bear said. “At the end of the day, we just have to keep working.”

The Hurricanes don’t seem concerned about effort, but some of the details are troublesome.

“We’ve got to capitalize on our chances,” Carolina coach Rod Brind’Amour said. “If you don’t, good teams are going to make you pay.”

The Hurricanes departed Toronto with concerns about captain Jordan Staal, who took a nasty-looking spill late in the game.

Washington’s power play has been clicking to the tune of 31.1 percent for the last seven weeks. Carolina’s penalty-killing has been among the best in the NHL throughout the season.

Still, with lots of special-team situations that put ice time out of kilter for some Washington players Thursday night, that’s something to consider going into Friday’s game, according to Laviolette.

Meanwhile, the Hurricanes are sorting through some frustrations on power plays.

Brind’Amour said better execution of the plan could make a difference with the man advantage. The Hurricanes were 0-for-3 in Toronto.

“I think we’re trying to figure that out right now,” Hurricanes center Vincent Trocheck said. “I think it’s a matter of us getting more pucks to the net and maybe playing a little bit simpler. It’s something we really have to figure out here shortly.”

The Hurricanes might get a boost, as defenseman Tony DeAngelo could be ready to return to action. He hasn’t played since sustaining an abdominal injury on Feb. 21. DeAngelo is considered a key in directing power plays for Carolina, so that could solve some of those issues.

DeAngelo’s status came down to a game-time decision Thursday night. Despite pregame work, he didn’t play.

Carolina used Frederik Andersen in net Thursday night, so that could mean a change to Antti Raanta, who filled in well earlier this month when Andersen was out with an ailment. Andersen has been back in action for less than a week, so with the busy schedule, the Hurricanes are bound to switch up some of the assignments.

Vitek Vanecek got the win for the Capitals on Thursday, so it’s possible Ilya Samsonov will start against the Hurricanes.