Hurricanes explode on offense in 7-2 rout over Blues 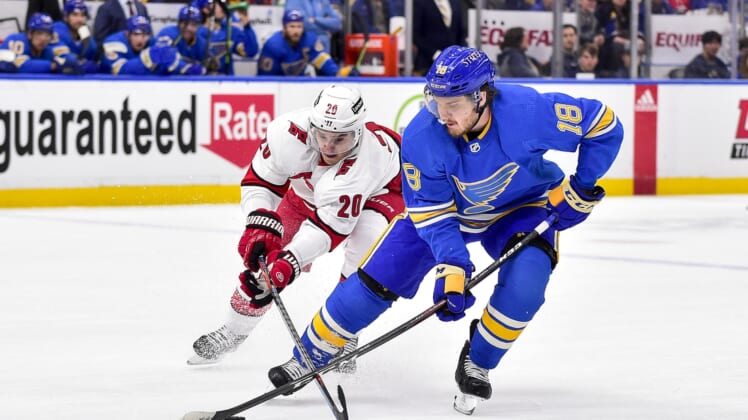 Andrei Svechnikov and Seth Jarvis each scored two goals and the Carolina Hurricanes snapped out of their scoring slump with three goals in the first 24 minutes of a 7-2 victory against the host St. Louis Blues on Saturday night.

Martin Necas, Brett Pesce and Nino Niederreiter also scored for the Metropolitan Division-leading Hurricanes, who won for just the second time in their last seven games (2-3-2).

Teuvo Teravainen, Ian Cole and Jesper Fast all provided two assists, while Necas and Pesce notched assists for two-point nights for the Hurricanes, who had only six goals in their previous three games combined.

Pavel Buchnevich scored twice and Robert Thomas had two assists for the Blues.

Goalie Antti Raanta made 30 saves for Carolina. St. Louis goalie Ville Husso stopped 21 shots, though the Blues gave up two empty-net goals and then Cole’s tally in the final 5:05.

Falling behind early has been a trouble spot in the past couple of weeks for the Blues and that situation developed again. Necas opened the scoring 2:37 into the game. Jarvis and Pesce then scored slightly more than two minutes apart early in the second period.

Buchnevich got the Blues on the board at 13:12 of the second period, but Svechnikov’s power-play goal 86 seconds later re-established Carolina’s three-goal lead at 4-1.

Buchnevich tacked on his second goal of the game and 21st of the season 6 1/2 minutes into the third period on a power play. By then, the Blues were buzzing a bit.

The Hurricanes put only one shot on goal in the first 14 minutes of the third, though they scored on three of their five shots in the period. Svechnikov reached 25 goals for the season with his empty-net goal at 15:05.

With St. Louis finishing with a 32-28 upper hand in shots on goal, it marked just the second time in the last 12 games that Carolina’s opponents had more shots than it cranked out.

St. Louis is in a 1-3-2 stretch, and has given up five or more goals in three of its past four games.