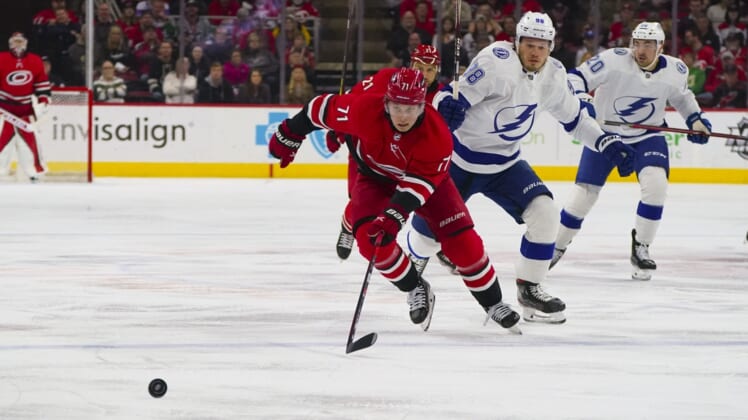 Martin Necas, Tony DeAngelo and Sebastian Aho had the Carolina goals. The first two came on what have become rare power-play tallies for the Hurricanes, who had been 0-3-1 across their previous four games.

Nick Paul scored in his first game with the Lightning and Alex Killorn added the second goal with 59.3 seconds remaining when the Lightning went with an extra skater. Goalie Andrei Vasilevskiy made 38 saves. Tampa Bay lost for the fifth time in its last seven games.

Necas’ power-play goal came at 6:56 of the second period.

That ended a stretch of more than 112 minutes without a goal for the Hurricanes, who were blanked Sunday in a 2-0 loss to the New York Rangers.

Paul’s goal came when he chipped the puck into the net off a shot from Ross Colton.

The Hurricanes went back in front as DeAngelo’s shot clipped off a Tampa Bay player on the way to the net.

So that was two power-play goals in a seven-minute span for Carolina, which went the previous six full games without one.

Aho’s goal came when he controlled a pass from Seth Jarvis with the aid of his skate. Then Aho jammed the puck past Vasilevskiy.

The Lightning had Paul, a left winger, in the lineup for the first time since a trade with Ottawa brought him on board Sunday. He redirected Colton’s shot for the goal.

This was the first time other than a preseason game that the Lightning had visited Raleigh since Tampa Bay won Game 5 of a playoff series last June.