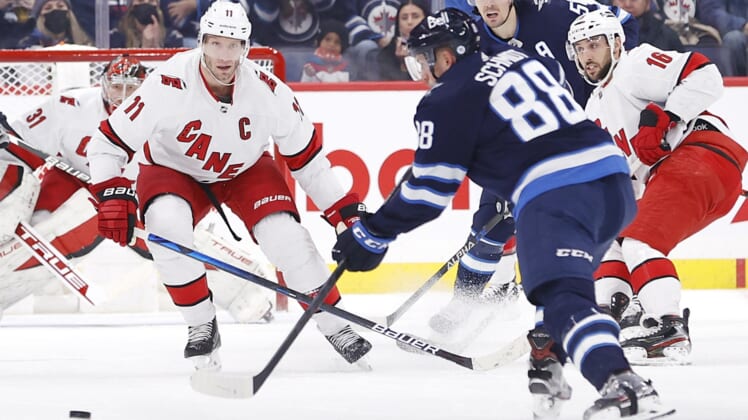 The Carolina Hurricanes are back home and probably need to take a deep breath. It was just a two-game road trip, but so much has happened that could shape their postseason fortunes.

The Hurricanes (49-20-8, 106 points) might find out more about how it fits together when the Winnipeg Jets visit Thursday night for a game in Raleigh, N.C.

The Jets (35-31-11, 81 points) are helping to set the table for the final stretch for the pecking order in the Metropolitan Division. They lost 3-0 on Tuesday night to the host New York Rangers.

The Hurricanes and Rangers are tied atop the Metropolitan Division.

Carolina split two games on the trip, falling to the Colorado Avalanche and then beating the Arizona Coyotes on Monday night. Colorado has the NHL’s best record and Arizona holds the league’s worst record.

In the Colorado game, the Hurricanes finished with goalie Frederik Andersen and captain Jordan Staal out of the game. Andersen’s status remains unclear because of a lower-body injury, while Staal took a big hit but appears likely to be back in action soon — perhaps even for Thursday’s game.

“We miss him definitely big time and hope he’s going to be back pretty soon,” winger Nino Niederreiter said of Staal.

Neiderreiter and Jesper Fast have been staples on Staal’s line, and that duo seemed to click with Max Domi as well.

“With those two guys, you know what you’re going to get,” Hurricanes coach Rod Brind’Amour said.

Domi did his part by scoring for the first time since joining the Hurricanes in a March 21 trade.

“Anytime you can break the ice like that,” Domi said of finally finding the net and posting his 100th career goal.

The depth element could be crucial for the Hurricanes.

“For our team to have success, I think that’s what we need,” Domi said. “We all have so much confidence with everybody in the lineup.”

The Jets are wrapping up a six-game road trip that began with two wins and since then has resulted in losses to playoff-bound Florida, Tampa Bay and the Rangers by a combined score of 16-5.

“The fun part of hockey is winning games,” Winnipeg winger Pierre-Luc Dubois said, noting the Jets are having trouble setting the tone at their preferred pace. “There’s some nights where it just feels like we’re playing catch-up.”

Jets interim coach Dave Lowry said there have been positives, pointing out good stretches against the Rangers.

“I thought we played a real solid game and deserved a better fate,” Lowry said. “These guys understand how we need to play to be successful.”

Winnipeg was without top goalie Connor Hellebuyck in New York because of an illness not related to COVID-19. Mikhail Berdin was recalled from Manitoba to back up Eric Comrie.

Winnipeg’s visit to Carolina has a different tone than it would have held several months ago before Paul Maurice resigned as Jets coach in late December. He’s the Carolina franchise’s all-time coaching wins leader with two stints in charge of the team.

The Hurricanes beat the Jets 4-2 on Dec. 7 in Winnipeg.