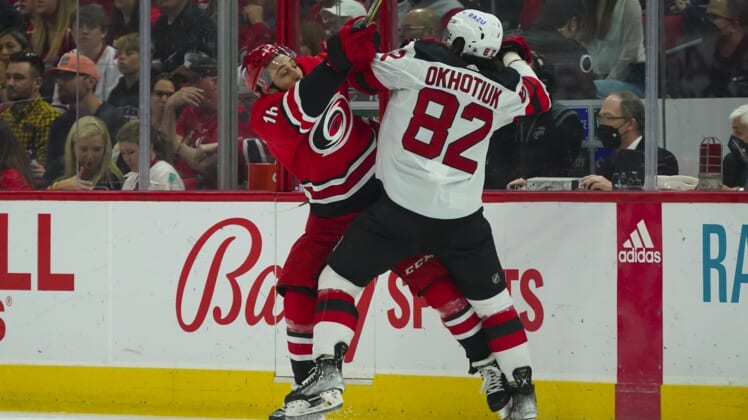 Jesperi Kotkaniemi provided a goal and two assists in his return from an injury-related absence and the Carolina Hurricanes used a makeshift lineup to conclude the regular season in style by defeating the New Jersey Devils 6-3 on Thursday night at Raleigh, N.C.

The Hurricanes (54-20-8, 116 points) increased their single-season franchise record for wins and points just two nights after sealing the Metropolitan Division championship. They will open the playoffs with a pair of home games next week against a to-be-determined opponent.

Hurricanes goalie Antti Raanta made 27 saves to boost his record to 7-0-1 all-time against New Jersey.

Kotkaniemi, a center, had sat out the past five games and appeared in just two games in the past month because of injuries.

Bear and Necas notched goals in a 49-second span in the game’s first six minutes. Kotkaniemi had assists on the first two goals before posting his 12th goal of the season at 12:53 of the opening period. Kotkaniemi secured the first three-point game of his 237-game NHL career.

Zetterlund’s second goal of his career in his 13th game came 62 seconds after the Devils found themselves in a 3-0 hole.

Teravainen restored the three-goal cushion with a blast from the high slot with 2:33 left in the second period.

The Devils conclude their season Friday night at home against the Detroit Red Wings.