Hurricanes and Blues both searching for a spark 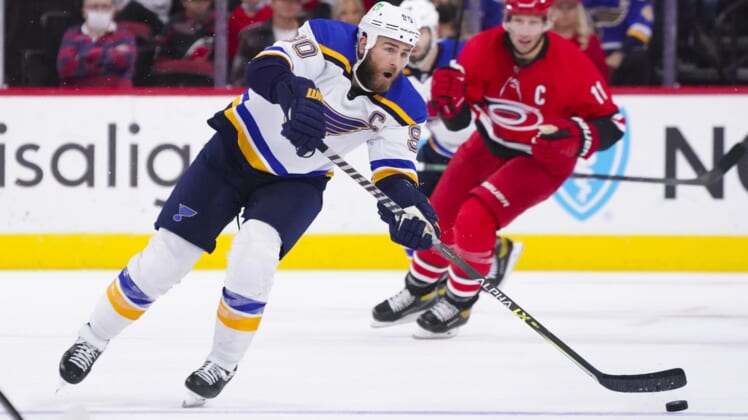 The St. Louis Blues have not gotten the results they’re looking for in recent games. The same can be said for the Carolina Hurricanes as the teams square off Saturday night in St. Louis.

But while the Hurricanes are somewhat content with how they have played despite the results as they continue to lead the Metropolitan Division, the Blues are not at all satisfied with some of their recent efforts, leaving their third spot in the Central Division vulnerable.

“The work ethic wasn’t there,” St. Louis defenseman Justin Faulk said after Thursday’s 5-2 home loss to Philadelphia. “The compete level and the intensity wasn’t there from a lot of guys. I’m very much in that group.”

The Hurricanes are coming off a 1-1-2 homestand, falling twice in shootouts. They have won just one of the past six overall (1-3-2).

“Always at this time of the year it switches over and it becomes a grind type of mindset,” Hurricanes forward Derek Stepan said.

Carolina has outshot its last three opponents by considerable margins. Yet the cumulative edge of 132-62 in shots produced only one victory. The Hurricanes have just six goals to show for all of those shots.

“We’re in a little bit of a rough patch right now, but we know that’s the way we need to play,” defenseman Brady Skjei said. “I think we’re all still confident. If we play like that, we’re going to win a lot of hockey games. We all know that.”

Left winger Teuvo Teravainen is third on the Hurricanes with 49 points, but he only has three assists across the last eight games.

St. Louis has scored the fifth-most goals in the NHL this season.

“It has been a little bit of a theme, starting slow and then thinking we can score our way through,” Faulk said. “Certainly at times that’s going to happen. To think that’s going to continually happen and think you’re going to be on the right side of things more times than not, that’s not true.”

So tightening up on defense is a priority for the Blues.

“We’ll keep working and get through it,” St. Louis captain Ryan O’Reilly said.

This matchup with the Blues marks the beginning of Carolina’s three-game road trip against playoff-level teams. The Hurricanes are 0-3-1 in March road games.

The Hurricanes could see more from forward Max Domi, who was on the fourth line for his debut with Carolina on Thursday night against Dallas after arriving in a trade from Columbus.

“That line was good,” coach Rod Brind’Amour said. “He just needs some time to figure out how we play a little bit.”