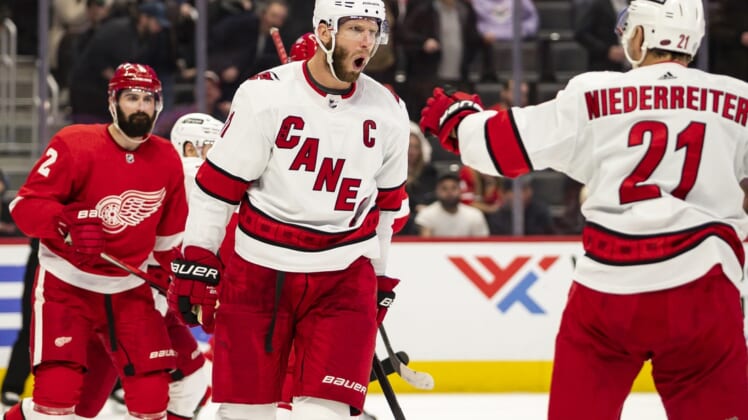 The Carolina Hurricanes have already played one huge game this week.

Now they must show they can produce the same results in a game that won’t feel like a showdown.

That comes Thursday night against the Detroit Red Wings at Raleigh, N.C.

“We’ll take the two points and talk about the next one being the big one,” Hurricanes coach Rod Brind’Amour said after Tuesday’s 4-2 win against the New York Rangers.

This game might qualify as a trap game for the Hurricanes, with Saturday night’s road game looming against the Western Conference-leading Colorado Avalanche.

Carolina (48-18-8, 104 points) is second overall in the Eastern Conference in points after stretching its lead on the Rangers to four points atop the Metropolitan Division.

Yet Tuesday’s game was not an especially sharp outing for the Hurricanes, who were mostly outplayed for two periods. They’re fortunate that goalie Frederik Andersen keeps coming through.

“All these things do add up,” Brind’Amour said of some missed assignments. “Then when you do mess up, your goalie has to make a save.”

Detroit (28-35-10, 66 points) is playing out the string, but the Red Wings will face a bevy of teams heading to the postseason so their results are bound to affect how those teams are seeded.

The Red Wings are 2-3-1 in April and it’s not going to get any easier. Four of their next five games are on the road, and this game begins a 10-day stretch of six matchups with playoff-bound teams. Each of the foes already has at least 95 points.

This Detroit-Carolina game will involve a matchup of brothers, with Marc Staal of the Red Wings and Jordan Staal of the Hurricanes.

“We play some good teams the next couple of weeks,” Marc Staal said. “We’ve to get on the road and do a job because like I said, we’ve got some tough teams coming up. … Go into Carolina and just play better.”

Even though the Red Wings’ 4-1 home loss to the Ottawa Senators on Tuesday night marked Detroit’s lowest scoring output in the last eight games, it’s the defense that needs to tighten up.

“We’re still giving up too many chances in D-zone coverage and off the rush,” Marc Staal said, “and not countering that and creating our own.”

That’s the message from Blashill as well, particularly facing a Carolina team that is plus-70 in goal differential. Detroit is minus-71.

“We’re going to play teams that are really good,” he said. “We have to make sure we don’t have extended D-zone shifts.”