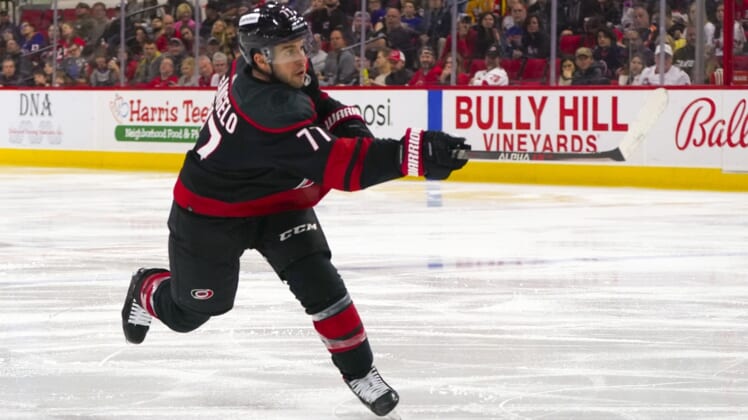 The Carolina Hurricanes need to win the games they’re expected to win if they hope to finish in first place in the Metropolitan Division.

The Hurricanes will get another opportunity to take advantage of a weaker opponent when they host the Anaheim Ducks on Sunday evening in Raleigh, N.C.

The Hurricanes (46-18-8, 100 points) have lost three of their past four games and four of six (2-3-1). Carolina’s two most recent defeats have come against non-playoff teams.

After splitting a home-and-home series against the Buffalo Sabres, Carolina allowed the eventual game-winning goal with 14.1 seconds remaining in a 2-1 setback on Friday to the visiting New York Islanders.

The New York Rangers, meanwhile, won their third straight game on Saturday night to move into a tie in points with the Hurricanes, who remain atop the Metropolitan Division because they’ve played one fewer game.

“It starts at the beginning of the game,” said Vincent Trocheck, who scored the lone goal against the Islanders on Friday.

“We’ve got to start better. I don’t know what it is, but if we get off to a better start in the first period and we get out to a lead, it’s a different game.”

The Philadelphia Flyers got off to a hot start against the visiting Ducks on Saturday night, scoring two goals in the first 2:28. Anaheim, however, showed some resilience and rallied for a 5-3 win to avoid losing for the 14th time in the past 15 games.

Zegras scored two goals, although it was his spin move behind the net in the third period that drew rave reviews.

“I’m just going on instincts out there,” Zegras said. “You play with great players like Troy and (linemate Derek Grant), and they open up space for you … just kind of make it up as we go along out there. It seems to be working.”

Carolina coach Rod Brind’Amour would like to see his power-play units get more involved in the offense. The Hurricanes are 0-for-10 with the man-advantage over the past four games and 1-for-20 over the past seven to fall to ninth in the NHL at 23.1 percent.

“They’ve been terrible, let’s just be honest,” Brind’Amour said. “The second unit’s actually been pretty good, but our first group’s just got to be way better. We’ve got stuff to work on, which is good.”

Brind’Amour listed a variety of reasons for the recent lack of success on the power play, but none call for a switch in personnel.

“They’re not executing,” he said. “There’s no speed, they’re just coming up nonchalant. They’ve got to have more intensity. They’ll get it back.”

The Hurricanes likely will come back with Frederik Andersen in goal after he stopped 19 of 21 shots against the Islanders.

Andersen, a former third-round pick of the Ducks who was traded to make room for John Gibson, has lost three straight starts in regulation for the second time this season. Andersen, however, still leads the NHL in goals-against average (2.07) and is third in save percentage (.926).

Gibson is expected to start in goal after Anthony Stolarz made 30 saves against the Flyers on Saturday.

Gibson is winless in his past 11 starts.