Hurricanes aim to atone after ‘unacceptable’ effort vs. Sabres 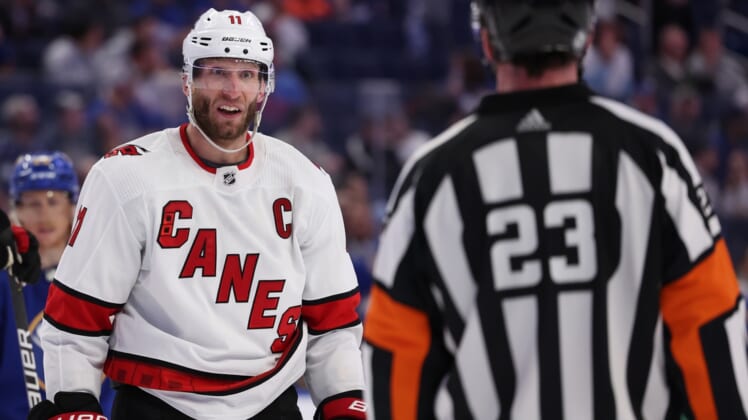 Denied a chance to close in on a playoff spot, the Carolina Hurricanes look to rebound when they host the Buffalo Sabres on Thursday night in Raleigh, N.C.

“That game was unacceptable the way we played,” forward Nino Niederreiter said. “We just never really found our game until the last period. And I mean, at the end of day, there’s no easy win, no easy team to play against, and they play hard. We just took the game for granted and thought was it going to be an easy game and that sure wasn’t the case.”

Carolina has lost two in a row and is 4-5-3 in its past 12 games. While the team last dropped three consecutive contests in an 0-3-1 run in mid-March, it hasn’t lost three straight in regulation since Nov. 28-Dec. 2.

“I don’t think there’s ever a reason to not be playing the way you should be,” forward Derek Stepan said. “Obviously it can happen where it slips but the most important thing is the understanding, and the message needs to be that it can’t. It has to continue the way it was for 60-odd games.”

The Sabres’ triumph was just the latest for the club against a quality opponent. Buffalo is 10-4-3 in its last 17 games, with wins against the likes of Toronto, Calgary, Nashville and Pittsburgh as well as Carolina.

“I like playing teams that are good teams,” Buffalo coach Don Granato said. “I think you get a lot more excited about it, so I’m excited, I’m excited for the challenge. We played well enough, obviously, to win (Tuesday) against Carolina. Now we go to Carolina, and they’re going to elevate their game in their building with their crowd and their emotion and their energy. … Where we’re at as an organization, where we’re at as players, we need to be challenged and we need to thrive on that.”

It hasn’t been the easiest of seasons for forward Victor Olofsson, who missed three weeks with an upper-body injury in November that affected his shooting ability and hindered it for several months after he returned.

But Olofsson has found his game again. His goal against the Hurricanes was his fourth goal in the past five games and ninth in his past 17 to bring his overall season total to 16.

“When you don’t score for 30 games it obviously goes to your head and you think a little bit too much whenever you get a good chance,” Olofsson said. “I feel way more way more confident right now and the puck seems to keep finding the net, which is a little bit of a relief and makes things a lot easier.”