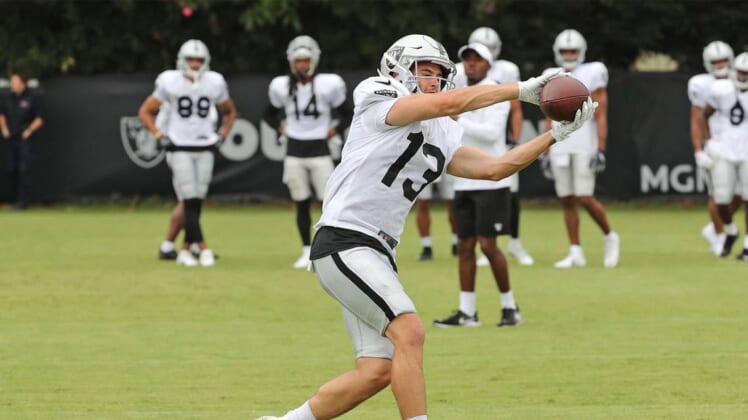 It’ was just another day and another drill at Las Vegas Raiders training camp but a Hunter Renfrow video of a simple drill at practice has caught fire and the attention of coaches and experts nationwide.

If you bumped into Las Vegas Raiders wide receiver Hunter Renfrow at the local Costco, you’d probably have trouble believing he’s a professional football player if he told you so. Yet his athletic ability, and skills as a wideout, have made a simple Hunter Renfrow video one of the most viral in the NFL this week.

Reporting in The Athletic, writer Bruce Feldman talked with football coaches and analysts who are blown away by the precision and skill shown in the Hunter Renfrow video.

The short clip has created a massive buzz in the football community and has also proven to be a great bit of PR for Renfrow and the Raiders. Still, the skill shown against veteran defensive back Prince Amakumara has to make fans also feel good about the second-year wide receiver. Renfrow’s role as a slot receiver for the Raiders is an important one with Jon Gruden’s offense relying heavily on ball control and short passes that gain positive yards.

“Keys to being a great slot—acceleration and deceleration,” Jim Nagy, executive director of the Senior Bowl told Feldman. “Few better than Renfrow in that ability.”

“I believe I have a reputation of not ‘overselling’ my wide receivers the last 8-10 years at Clemson,” Scott said. “I told many pro scouts when they were coming to watch Hunter Renfrow that if you brought your best cover corner from your NFL team and gave Hunter five reps, he will best your best cover guy three out of five because his breakpoints are insane.”

Not bad for a guy you might not give much notice grabbing that free sample at the warehouse store.