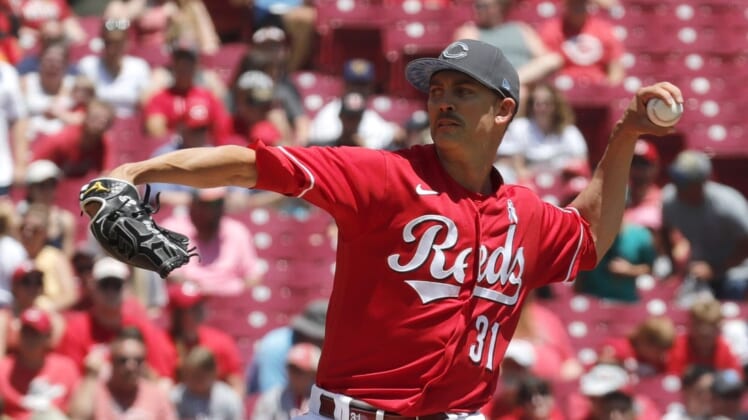 Hunter Renfroe homered for the third straight game and starter Adrian Houser overcame one rough inning to help the visiting Milwaukee Brewers complete a three-game sweep of the Cincinnati Reds 6-3 on Sunday afternoon.

Houser (4-7) retired his final seven batters, holding the Reds to four hits and three runs over six innings to break a personal five-game skid dating to his last win over Cincinnati on May 5.

With Josh Hader on paternity leave, Devin Williams pitched a perfect ninth for his fifth save in as many chances, extending his scoreless streak to 15 innings over 15 straight appearances.

Catcher Victor Caratini homered and singled for the Brewers, who completed their first three-game series sweep since beating the Reds three in a row May 3-5 and finished their nine-game road trip 5-4.

Albert Almora Jr. had a two-run double in a three-run fourth for the Reds, who lost their fourth straight overall and fell to 2-7 in nine games against Milwaukee this season. The Reds did not hold a lead over the entire 27 innings of Milwaukee’s three-game sweep.

Reds starter and loser Mike Minor (1-3), who allowed four runs on six hits in six innings, held the Brewers scoreless and hitless over the first three frames, issuing only a two-out walk in the second to Keston Hiura.

Luis Urias doubled home Andrew McCutchen for a 1-0 Milwaukee lead before Caratini capped the three-run fourth with his fifth homer and a 3-0 advantage.

Houser, like teammate Jason Alexander the day before, was the beneficiary of stellar play from his left fielder. Brandon Drury singled and Tommy Pham walked with one out in the first.

Kyle Farmer sent a two-out sinking liner to shallow left-center. McCutchen, like Tyrone Taylor on Saturday, made a diving catch that prevented the Reds from taking an early two-run lead. Farmer was robbed again in the eighth by a sliding Taylor catch in center.

After Cincinnati’s three-run fourth tied the game, Mark Mathias put the Brewers back on top in the sixth with a bases-loaded sacrifice fly.

The Reds loaded the bases in the seventh against Trevor Kelley, but lefty reliever Hoby Milner struck out Votto to end the threat.