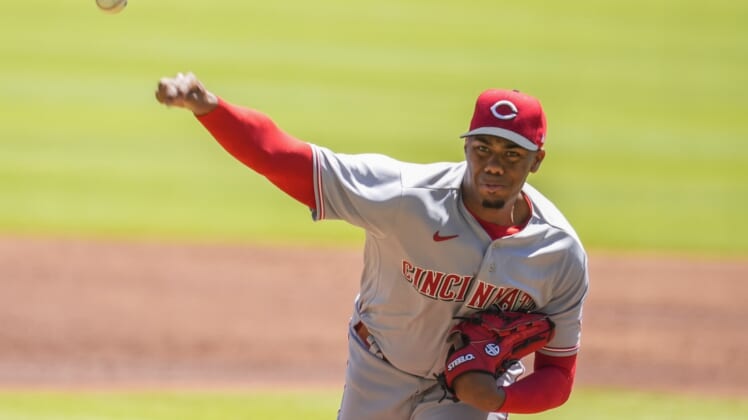 Hunter Greene was overpowering in his major league debut and battery mate Tyler Stephenson homered in his hometown as the visiting Cincinnati Reds beat the Atlanta Braves 6-3 to earn a split of the weekend series.

One of the most heralded pitching prospects in baseball, Greene topped 100 miles per hour on 20 of his 92 pitches over five innings.

The 22-year-old Greene (1-0) held the defending World Series champions hitless in his first three innings before finishing the day with seven strikeouts and two walks, allowing four hits and three runs. Luis Cessa, Tony Santillan and Art Warren combined for four scoreless innings of relief, with Warren throwing a scoreless ninth for his first career save.

Ian Anderson (0-1) labored in his first outing of the season, allowing five runs on three hits while matching a career-high with five walks. Matt Olson homered and had another three-hit day, giving him eight hits in his first four games with the Braves.

After stranding three runners over the first two innings, the Reds finally took advantage of Anderson’s wildness and lack of command in the third.

Jonathan India worked a leadoff walk and scored from first on a Tyler Naquin double to right. Following a groundout from Tommy Pham, Joey Votto walked. Nick Senzel grounded to short, but instead of an inning-ending double play, Senzel hustled hard down the line, just beating the relay to first to score Naquin.

Greene struck out six through the three no-hit innings before the Braves finally got to the rookie in the fourth. Matt Olson drilled a 101-mph fastball to right for a single. That was followed by a deep drive to center by Austin Riley that was misjudged by Senzel on the warning track.

The double put runners at second and third with none out. Greene minimized the damage, allowing only a sacrifice fly from Marcell Ozuna. He was aided by Votto’s diving grab of a line drive from Alex Dickerson to end the inning.

Stephenson homered to left field in the fifth to push the Cincinnati lead back to five at 6-1.

The Braves added a pair of solo homers from Travis d’Arnaud and Olson off Greene in the fifth before Cessa took over to start the sixth.