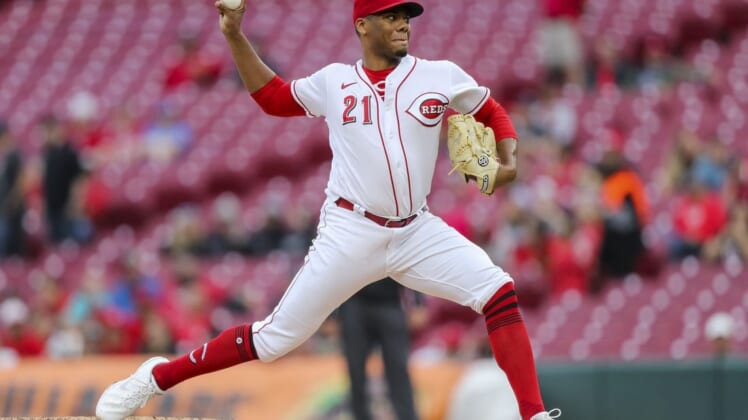 Kyle Farmer and Tyler Stephenson each had two hits and two RBIs and Brandon Drury had two hits, including his team-leading 10th homer as the Reds snapped a three-game losing streak.

Greene, who held the Pirates hitless in 7 1/3 innings on May 15, overpowered the Diamondbacks, striking out eight and walking none for the second straight start.

Greene also struck out eight and walked none against the Boston Red Sox on June 1. But on that night, he lost his command in the fourth inning at Fenway Park, allowing the first five batters to reach and taking the loss in a 7-1 defeat to the Red Sox.

On Monday, Greene had no such trouble with the Diamondbacks, allowing only Daulton Varsho’s but single to start the game. Varsho was caught stealing as Josh Rojas struck out, starting a string of 20 straight batters retired by Greene.

The Reds scored in the first inning for their fifth straight game, coinciding with the beginning of their homestand. With one out, Drury drove a pitch from starter Madison Bumgarner (2-5) to the seats in right-center for his team-leading 10th homer of the season and a 1-0 Cincinnati lead.

In the first five games of their eight-game homestand, the Reds have scored a total of 11 runs in the first inning.

Joey Votto doubled after Drury’s homer, giving him 800 career extra-base hits. After Votto’s double, Bumgarner had words with home plate umpire Dan Merzel over the strike zone while angrily tossing away baseballs because he didn’t like the grip.

Nick Senzel singled home Alejo Lopez in the second, and Kyle Farmer’s double to center in front of a sliding Alek Thomas, who let the ball get past him, scored Joey Votto and Tyler Stephenson for a 4-0 Cincinnati lead.

Torrential rains began as Cincinnati was pouring it on with hits against reliever Taylor Widener in the seventh. Instead of covering the field, the umpires allowed the game to continue.

With Aristides Aquino at the plate and three runs already in, the game was halted and did not resume.